You are here: HomenextChapelsnextDorsetnextSturminster Newton The Bridge Primitive Methodist chapel 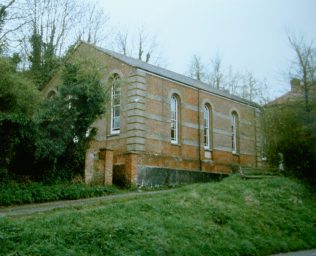 After the  society amalgamated with the Wesleyan chapel in Church Street in 1959, this building was used as the Methodist Youth Centre and Sunday School.

Keith Guyler’s notes accompanying his photograph say that it was formerly a public house.  He also refers to a second  chapel of 1870, disused at the time of his notes.

Following Adam Miller’s additional information below, we can confirm the 1870 re-building.  The Primitive Methodist magazine of 1870 contains an account by E Hancock on the laying of a foundation stone for a new chapel on July 18th 1870. He explains that the old chapel was too small so it was  pulled down to accommodate larger building which was expected to cost around £600. E Hancock writes again to the magazine in 1871 with details of the opening on October 30th 1870. Preachers were Revs D Kendal and Geo. Rogers (Independent). Liberal donors included Mr H Stroud £20, Mrs Stroud £10, a friend £20, a friend’s wife £10, etc.. The new chapel measured 43′(l) x 33′(w) x 20′(h).

I can’t find The Bridge chapel on Google Street View; can anyone say where it is and explain the possible second chapel?