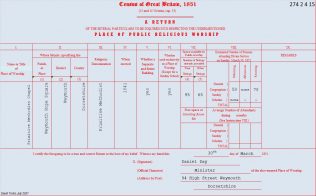 zoom
Weymouth: return from the Primitive Methodist chapel to the 1851 Census of Places of Public Religious worship. Return no. 274 2 4 15
provided by David Tonks 2021

Weymouth.  A Primitive Methodist missionary visited this town in the year 1834, from Sunderland circuit; and in 1836, Manchester circuit took it up, and supported it at no small expense and trouble.  But they will be rewarded at the last day.  In the year 1840, Poole circuit took it, and in 1841, it was made a circuit.

Till this time a heavy rent had been paid for a preaching-room; but it was become quite inconvenient on account of a public-house being under it; and we were frequently annoyed with music, dancing, and tobacco smoke.  We therefore  had a desire for a chapel; but we knew not where to get land, or money, or trustees.  But the Lord opened the way.  A person quite unexpectedly offered to lend two hundred pounds.  Land was purchased for fifty pounds, having some old walls upon it, on a thousand years lease, about ten of which were already expired.  We got the writings made, and the property settled on the Connexion, and commenced building.  And the chapel was opened on Sunday, August 8, 1841, when two sermons ere preached by Mr. Pope, from Motcombe, and one by Brother Harry.  On Monday, the 9th, a sermon was preached by Mr. Davis, Baptist minister, and one by Brother Pope.  In the evening we held a tea meeting, which was well attended, and the profits were put into the chapel funds.

The collections did not meet our expectations; nevertheless we feel thankful to all who have assisted us in a work so great and glorious.

The chapel stands in an eligible situation; is thirty-five feet by twenty-six, and eighteen to the ceiling.  We have about ninety sittings to let, and between eighty and ninety free sittings; and most of the ninety are let.  The whole cost, exclusive of the land, is about one hundred and eighty pounds.  And that it may be the birth-place of many souls, is the prayer of the writer.”

The return from Hope Square Primitive Methodist chapel to the 1851 Census of Places of Public Religious worship was completed by the minister, Daniel Day of 94 High Street. On Census Sunday, 50 worshippers attended the morning service and 70 the evening one.  There was no Sunday School.

The chapel served until 1876 when it was closed.