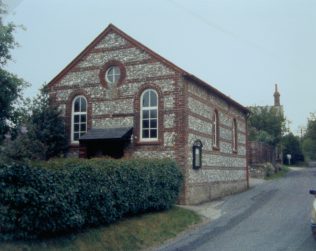 Woodyates is a village south-west of Salisbury.

Woodyates Primitive Methodist chapel was known as Ebenezer and opened in 1852.  It was still in use at the time of Keith Guyler’s photograph in 1988 but was later closed.  On Google Street View in June 2011 it is for sale and looks neglected and overgrown.

Can anyone report what has happened to it since?

The Primitive Methodist magazine for January 1853 contains an account by E Hancock of the opening of Woodyates Primitive Methodist chapel. Woodyates is described as a village with population of 370 “proverbial for drunkenness, fighting and other species of iniquity”. Soon after the village was missioned around 1852, a society was formed including two local preachers both previously significant members of the parish church – the parish clerk and the leader of the singing.  As a result unspecified but unsuccessful attempts were made to break up the young society.

B Herrington provided a very fairly priced site and the foundation stone was laid by Mrs Hancock on May 17th 1852, accompanied by various sermons and singing by the PM choir from Martin and the Wesleyan choir from Cranbourne.

The chapel was opened on October 17th 1852.  Sermons then and at later meetings were preached by A Bound, E Hancock, Rev Mr Mace, and Messrs Flemington, Shrimpton, Green, Herrington and C Martin