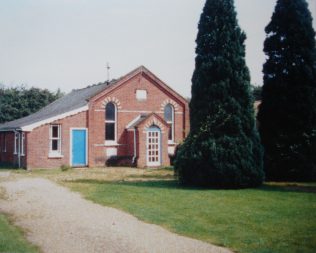 Burnt Heath Primitive Methodist chapel in Ardleigh Road Great Bromley near Colchester dates from 1861.  At the time of Keith Guyler’s picture in 1988 it was still in use but planning permission for conversion to a house was granted in 1999.  That’s the use in Google Street View in September 2012.

The laying of the foundation stone of the chapel is recorded by J Fortress in the Primitive Methodist magazine of 1862. The society had previously met in a cottage which had become too small.  Preachers at the ceremony and following tea meeting on October 23rd included  Rev Yeadon as well as Mr Fortress.