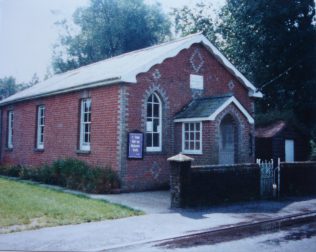 This chapel was built in 1863 in a simple 19th century Gothic style with red brick and white dressings and diamond-shaped patterns above the windows and door. By 1963 it was evident that extensive renovations were needed and these were carried out between 1963 and 1992. Attendance has always been reported as quite high even into its 125th anniversary year. However, congregations have got much smaller in recent years and in 2011 it was reported that closure seemed highly likely. Fortunately, in 2013 the chapel is still open for worship, having become a joint Methodist, Anglican and United Reformed Church.

See Martin Broom’s comment below for an update and correction.

“FOUNDATION-STONE LAYING AT Dedham, Colchester Station.— For the last four years we have laboured at this place with varied and pleasing success, but for want of a suitable place in which to hold our services, our efforts have been greatly retarded. In order to meet the wants of the society and congregation, it has been found necessary to build a neat and substantial connexional chapel, for which purpose an eligible site of land has been purchased, and several pounds are promised towards the building fund.

On Monday, November 2nd, 1863, the foundation services were held. The Rev. O. O. Britain preached a sermon, and after wards laid the stone in the name of the Holy Trinity, and deposited in a cavity prepared for that purpose a variety of Connexional and station documents, including a list of the trustees, the names of the builders, and the names of the circuit ministers. Afterwards about sixty persons sat down to an excellent tea, provided in Mr. Felgate’s barn.

At seven o’clock the barn was well filled at the public meeting, which was addressed by 0. 0. Britain, J. B. Lamb, J. Elsden, W. Stoggles, J. Nunn, K. Pratt, and — Abbott. The entire proceeds of the day were about £5, although the rain fell in torrents the greater part of the time. We will not murmur, but thank God and take courage.  O.O. Britain”

Than ks to Martin Broom for confirming this is Dedham Heath chapel and further information.  Martin lives next door in Chapel cottage and has researched the history of both. He has copy documents and names can be checked. Mr Felgate sold the land to the Trustees.

It is thought that a previous chapel stood in East Lane, a short distance away, but this may only have been a cottage or barn.