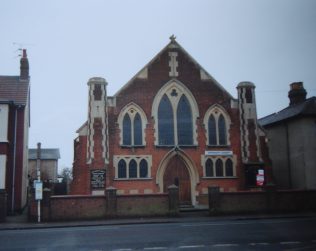 The village of Wakering, in Essex, was always a Puritan and Nonconformist stronghold, and the Primitive Methodists took root due to the village’s working-class environment. They began in cottages and with open-air meetings before deciding on the building of a chapel.

Great Wakering chapel was built in 1859 and the first service was held on Good Friday, 1859, attended by 170 people.

However, the attendance kept increasing and by 1904 new land was bought. In 1906 stone-laying went ahead and the new chapel was opened in the June of the very same year.This new chapel could hold 250 people with pews and had 2 school rooms, as well as 2 other rooms and in 1938 the chapel purchased its first electric blower organ. Unfortunately, in 1940 it was recorded that this chapel received bomb damage and so restoration needed to be done.

Brake, G. T (1994) Great Wakering and Little Wakering, The History of the Methodist Church in the Southend and Leigh Circuit, Essex: The Rochford Press, pp. 13