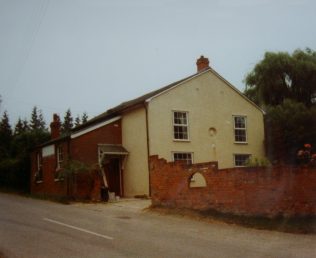 Hempstead south west of Haverhill is the birthplace of Dick Turpin, and the burial place of William Harvey, who discovered the circulation of blood. Hempstead Primitive Methodist chapel was opened in 1853.

At the time of Keith Guyler’s picture in 1988 it was in residential use.  Its location is marked on the 1946 one inch Ordnance Survey map (Saffron Waldon) just south of the junction of Church Road with High Street.

Jacqueline Cooper has made available on the Recording Uttlesford History website extracts from records held at the Essex Record Office, several of which refer to Hempstead. They include  financial problems in 1862 because £6.14s. was in the hands of the former treasurer, Samuel Andrews but ‘Old Farmer Andrews has failed in business; we have done our best to obtain the money, or a part of it, but have not been able to get any from him this past year, but have hopes that he will be able to pay it after a while, and he promises to do so’. But in 1865 he died, the debt unpaid.