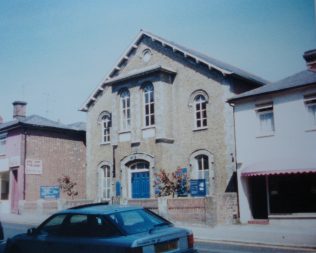 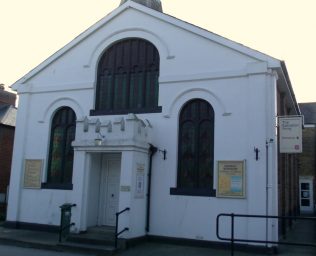 Wantz Road Primitive Methodist chapel joined with High Street Methodist Church in 1957. The Wantz Road building was sold to the Salvation Army the same year and continues to be used by them in 2015.

Keith Guyler’s notes say that the chapel in his picture is the former Primitive Methodist chapel in Wantz Road.  However, it is not the chapel currently occupied by the Salvation Army and visible in Google Street View on Wantz Road CM9 5DE. It is in fact the former Wesleyan chapel in High Street.

Thanks to Tim Banks for the recent photograph of the chapel in Wantz Road.

“In September following, a cottage was opened for a prayer meeting, and the formation of a society was the immediate result As winter approached, we obtained the use of a boat builder’s shop. This was a cold  place ; the floor was of earth, and we were exposed to the wind from every point of the compass. Sails were borrowed, and fastened up to screen us a little from wintry blasts. A large fire, lamps, rude candlesticks, some new forms, with bench for pulpit, gave the place some appearance of a sanctuary. A large congregation usually attended, and the word preached was with Divine power. And that old boatshed will never be forgotten. Subsequently, an old dwelling-house was hired, which has been called the school -room.”

The new chapel was 32′ wide by 40′ long. It cost £430 but they had only raised £80 – less than the amount required by Connexional regulations.