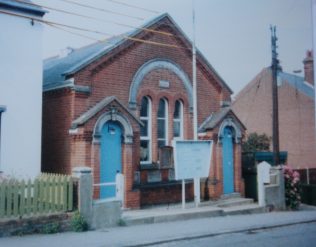 Although at the time of Keith Guyler’s photograph in 1988 and later in 1994 it was still open for worship, it has since been converted to  a house.

The words over the central arch say, in capitals, Primitive Methodist Church: the organisation had moved on from being a chapel.