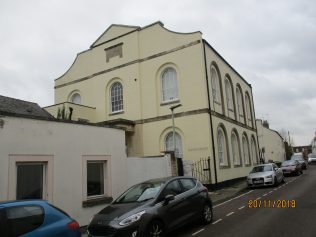 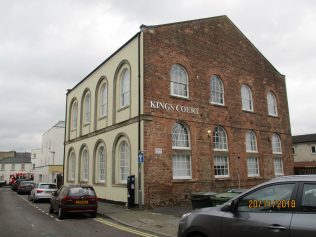 “Dear Editor,  I beg to inform you that we have  been enabled to secure a spacious  and comfortable chapel at Cheltenham. After proper preliminary  arrangements had been made, a trust  was quickly formed, deeds ordered,  prepared and executed, the chapel was well repaired, and our opening  services were commenced October, 9th 1859. In the morning and  evening the writer conducted public worship, and in the afternoon,  the Rev. James Smith preached for us.

The chapel occupies an excellent  position, is a very substantial edifice,  measures 45 feet square inside, is well pewed, and well lighted, has  two convenient vestries, a gallery in front and on the east and west  sides, and is capable of accommodating from 600 to 800 persons  with seats. Our chapel was built  for the Wesleyans in 1812; the situation is good, and it has cost us  purchase money £300; repairs &c, £50.

On Sunday, October 31st, three sermons were preached ; those in  the morning and evening by the Rev. M. Lupton, General Missionary Secretary, from London ; that  in the afternoon, by the writer.

On Tuesday, November 1st, we  held a tea meeting ; at the public  service afterwards, the chair was  taken by Mr. Lupton : the meeting  was also addressed by the Rev. T.  Close (Methodist New Connexion). Dr. Turnbull, Mr. Downing, and  W. Mottram.

These services were of a profitable and interesting character, and  will long be remembered. The  financial results of our efforts so  far, amount to £50.

Cheltenham, as your readers will  be aware, is an important midland  town, and popular watering place, and contains a population of about 40,000 souls.

In our chapel movement we are  indebted to many friends for their assiduous perseverance, to J. B.  Winterbotham, Esq., for making  the deeds  free of charge, and  to several evangelical ministers of  the town for substantial help, particularly the Rev. J. Smith, and,  above all, to the Author of all good  to whom be ceaseless praise.

That, through God’s gracious  blessing, a strong, active, and holy  Church may be raised and established here, is, dear Editor, the  prayer of  William Mottram”

The Gloucestershire County Council website gives us further information about the chapel which was in King Street.

“King Street or Ebenezer Chapel was opened by the Wesleyan Methodists on Sept 16th 1813. By the 1830s, Ebenezer was becoming too small, and in 1837 the decision to build a new church was made. Wesley Church on St George St was opened August 21st 1840..Between 1843 and 1855 the King Street chapel was used by the Cambray Baptists, before they moved to Cambray. The first primitive Methodist chapel in the town appears to have been on Russell Street, which began life as a Primitive Methodist mission in 1838. In 1847 the Methodists had no further use of the building and it was sold by auction to members of the Congregational Union (later becoming Gas Green Baptist Chapel). In 1851 the Primitive Methodists seemed to be revived in Cheltenham and took on a meeting place in Fairview Street, where they remained until they purchased the Ebenezer Chapel on King Street in 1859. The church closed in 1934, upon the merging of the Wesleyan and Primitive Methodists. It was later restored, and converted into flats in the mid-1990s, and is now known as ‘Kings Court’.”