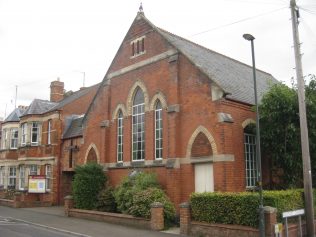 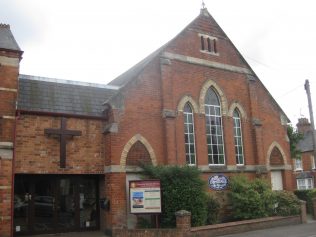 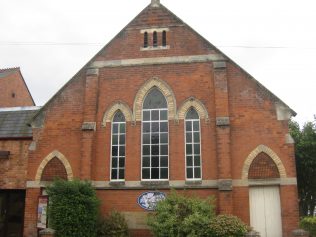 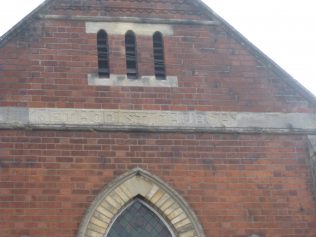 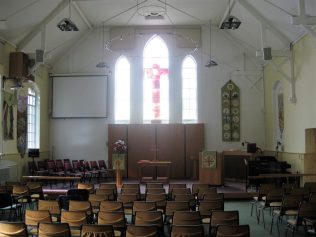 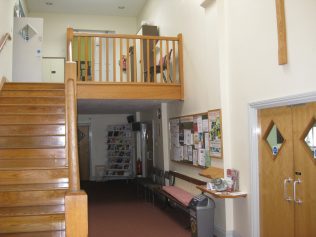 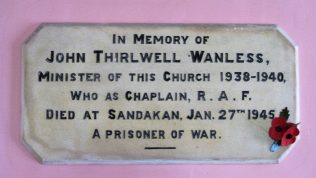 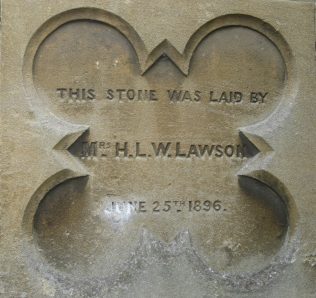 Ashcroft Road Primitive Methodist Chapel, has at sometime (1995) been tastefully modernised inside. (photos 5 & 6). It is still used for worship and other community activities.

You can read more about the previous chapel here.

Photo 7 is of the plaque in memory of Rev’d John Thirlwell Wanless who was minister here at Ashcroft Road between 1938 and 1940. He then left to join the R.A.F. as a Methodist Chaplain. The citation below is the story of his life from joining the R.A.F. until his sad death in 1945.

The Rev’d. John Wanless was Minister of Cirencester Methodist Church from 1938 to 1940 when he volunteered to become a Chaplain to the RAF.

John Wanless was a good preacher, careful and conscientious in pastoral duties and had a great ministry with young people shared with his wife Mary at Cirencester.

Sqn. Ldr. Rev’d J. T. Wanless was posted to the Far East and became Senior Methodist Chaplain to the Far East in Singapore. He was there before the surrender and was amongst the last RAF personnel to go to Java where he was taken prisoner

Letters from fellow prisoners witness to his effective ministry at different camps in Java and in Borneo. He was then moved to Changi Camp at Singapore and then on to Borneo in October 1942. Lastly he was moved to Sandakan in April 1943. One fellow prisoner said ‘his sermons were always fine and his command of English a joy to listen at his Toc H and other literary evenings’. In August 1943 the Japanese ordered all officers not involved in the running the Camp back to a central camp – but John stayed with the men. As the Allies came closer so the Japanese began to evacuate Sanadakan Camp in January 1945 and the prisoners were forced to march 150 miles through jungle and swamps to Ranau. Later in June 1945 these survivors were evacuated by the Japanese.

The Memorial Stone in the Church is incorrect as it is now known that John did not die until June 1945. John Wanless was mentioned in Despatches in the London Gazette for distinguished service. The obituary printed in the Minutes of the Methodist Conference 1946(?) states ‘Officers and men in great numbers have borne witness to his faithfulness in things of the Gospel. Chaplains of other denominations, officers and men of both Army and RAF have written their tribute to his selfless ministry. He will for ever remain in the highlight of chaplaincy service in the Royal Air Force’.

The Memorial stone was dedicated after the War and was moved to its present location when the Church was refurbished and extended in 1995 which was also the 50th Anniversary of V J Day and the end of the War, His widow Mary shared in the service of Re-dedication on V J Day 1995.

Thanks are due to Ashcroft Road Church for the above information.