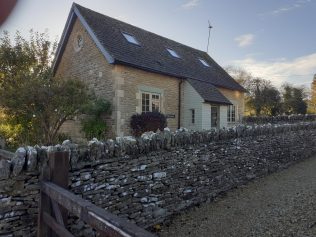 The Primitive Methodist magazine for February 1854 includes an account by G Lee of the opening of Eastleach Primitive Methodist chapel.  In fact this was a re-opening as the initial chapel near the western entrance to the village was opened in 1829 following the village’s missioning by Mr B Tripp the previous year.  In 1851 afternoon and evening congregations for the chapel of 90 and 110 respectively were reported in the Religious Census.

The new chapel was opened on December 11th 1853. It was necessary to build it as the roof of the previous chapel fell in.  The Rt Hon. Lord Le Mauley who owned the land on which the first chapel had stood “kindly consented to favour” the society with the land for the new one as the society had been unable to find suitable freehold land.  The stone built with and slate roofed chapel was 16′ high to the wall plate and seated 120 people.

The society “tender our thanks to his lordship for his kindness to the society in this case and also to Mr Cousens, his steward, for his influence in our behalf, and unto God be all the glory.”

Opening sermons were preached by G Lee and Mrs C Lee.  The chapel is marked on 1:2,500 Ordnance Survey maps in 1882 and 1899. The name then disappears, although the building may still exist.

The Victoria County History of Gloucestershire tells us that the building of a new Primitive Methodist chapel in the south part of the village in the Quarry just off The Bourne was begun in 1900 though it was not opened until 1909.  It is still on the 1960 map but had gone out of use by 1976 and had been converted to make a house.