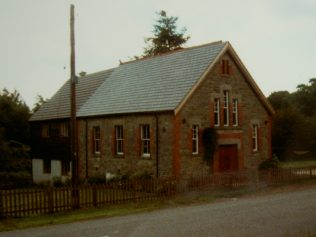 Primitive Methodist services held in the centre of the Forest of Dean at Moseley Green from 1859 were discontinued in 1864 for want of a congregation. They were resumed in 1867 and a chapel called Providence, standing north-east of the Barracks, was registered in 1879. In 1894 the meeting bought and moved to the Independent Bethlehem chapel, which had been  opened in 1866, some way south but in 1898 it returned to its former home. The return led to a drop in support and in 1907 a new chapel was built on the Blakeney-Parkend road to the south. That chapel, which was abandoned in the mid 1950s, fell into ruin but in the late 1980s it was rebuilt as part of a new house.

The chapel stands on its own; you wonder where the congregation would have come from.