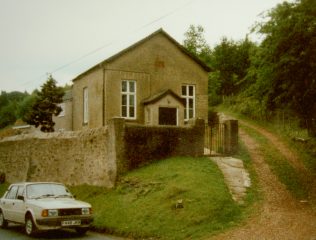 in 1861 a small chapel was built north-west of Nailbridge on Morse Road, below Ruardean hill. The chapel  closed in 1989.  Google Street View in 2009 shows it undeveloped but for sale.

Joseph Hibbs describes the laying of the foundation stone:

“The foundation-stone of a new chapel was laid at Rnardean Hill, Forest of Dean, on Monday, October 29th, 1860. Mrs. Mill’s, of Monmouth, laid the stone, and delivered an appropriate address. The Rev. T. Uobson preached an impressive sermon ; the writer and Mr. R. Wall, of Lydbrook, took part in the service. A tea-meeting was held afterwards in the Baptist Chapel, at which about 1 50 persons were present. The public meeting was well supported. The proceeds of these services were upwards of £6. We have an improving society at the above place, and hope the intended place of worship will be the spiritual birth-place of many souls.”

He writes again to describe the opening:

“A neat chapel was opened at the above place, on Thursday and Sunday, August the 15th and 18th, 1861. The Rev. W. Mottram, of Gloucester, preached on the Thursday, and Mr. Thomas Morgan, of Ross, on the Sunday. A good influence attended the word, and the collections and proceeds of the teameeting amounted to about £8. A chapel has been much needed for some years at Ruardean Hill ; six perches of land have been purchased of the Crown, the chapel stands in a good situation, is 25 by 23 feet, and 16 feet from the floor to the ceiling, has good stone walls, a good roof of red deal covered with Duchess slate, three large windows, &c, &c. It is well finished, and its entire cost will be £117. The total amount received and promised is £31 Os. 6d., which sum we shall raise to one-third of the cost of the chapel. May this sanctuary be the spiritual birth place of many souls, is the earnest prayer of Joseph Hibbs.”