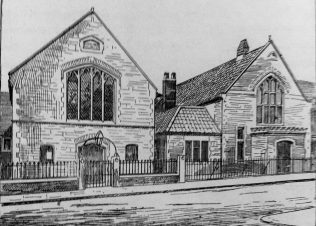 The Primitive Methodist Conference was held in Bristol in 1900 and there was a Handbook acting both as a reference for those who attended and a souvenir for everyone else.  In the Handbook there are pictures of the chapels used for the Conference meetings and rallies.

This is one of the chapels – but it is not named.  Thanks to  Neil for identifying it as Albany Road chapel Bristol. Only the chapel hall survives as a community centre – Albany Artists.  See the comment below.

The 1894 Primitive Methodist magazine contains a note celebrating the laying of foundation stones for a new large school hall and classrooms at Albany Street in Bristol.  It was expected to cost £1,000 , most of which they hoped to raise.  Is Albany Street the same place as Albany Road?