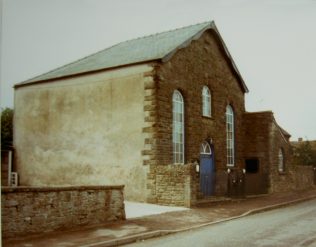 Zion Chapel (Primitive Methodist) was founded in 1846 and was enlarged in 1869.  It was closed in 1991 and has been converted into a number of flats.

It is labelled on OS 1881 1:2,500 as “Zion Chapel (Primitive Methodist)”. The Victoria County History series: A History of the County of Gloucester, Volume 5: Bledisloe Hundred, St Briavels Hundred, The Forest of Dean(1996), pp.396-404 (Forest of Dean – Nonconformity) refers to it as “Zion at Five Acres”, stating that it was built in 1851 by a society previously established Joyford. This was, presumably, the society recorded as having registered a house at The Lonk (off Joyford Hill) for worship in 1846.

The Primitive Methodist magazine for December 1851 gives an account by George Grigg of Monmouth of the opening of Joyford Primitive Methodist chapel. Mr Grigg had preached at a camp meeting at Joyford on 11th August 1850 where “a very powerful unction from heaven rested on the preaching services and in the lovefeast at night the arm of the Lord was made bare.”  The society grew and Mr Thomas Webb Junior offered a site for a chapel.  The foundation stone was laid by Rev Jenkyn on June 15th 1851.  Although not complete, it was opened on Sept 7th.  It seated 180 and cost £70 of which £18 had been raised.