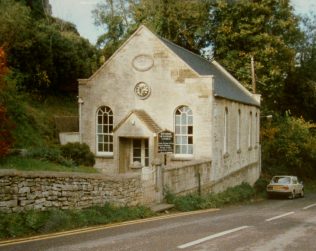 Butterow (sometimes spelt Butter Row) is a hamlet on the steep side road leading up from Bowbridge onto Rodborough Common.

The Religious Census of 1851 (HO 129/338/5/1/2) records a “dwelling house” with “no particular name” which had been opened for 27 years for a congregation of Primitive Methodists. Inside there was free seating for 35, and it had an average congregation of about 20. The return was completed by Jacob Smith, who was “class leder and Lokel precher”. His address was “Kings Court, Rodborough, Near Stroud, Gloucestershire”.

Zion Primitive Methodist Chapel was built five years later, in 1856.Thomas Hobson described it in the Primitive Methodist magazine of 1856: “Early in the spring of this year Mr. Benjamin Antill (a gentleman resident at Butter Row), kindly offered to give us a piece of land, in a good situation, for a chapel, and £10 towards the erection. This offer our March quarterly meeting decided to accept, and the foundation-stone of the chapel was laid, May 13th, by Master Benjamin Hillier Antill, son of the gentleman who gave the land. The chapel is 29 ft. long, 21 ft. wide, and 14 ft. from the floor to the ceiling”

The opening was celebrated from  Sunday, September 28th, 1856: sermons were preached by the Rev. C. T. Harris, of Bristol, the Rev. W. Wheeler, Independent minister, of Stroud, the Rev. W. P. Johns, Wesleyan minister, and brothers Hall, Harris, and Johns.

The entire cost of erection and the incidental expenses was £173 17s. 2d. By the end of the tea meeting (for 200) held a few days after the opening, the entire amount had been raised or promised. Generous donations came from Messrs. Antill, Hobson and Hall. Particular thanks were due to Mr. Antill, the great interest which he had taken in the erection; to L. W. Winterbotham, Esq., solicitor, for making the deeds gratuitously; to J. W. Hall, Esq., of Broadmead, Bristol, for giving the glass for the windows; and to Mr. W. Leach, for making the forms gratuitously.

In 1987 Zion chapel was listed as of architectural interest with the following description:

The chapel closed after 1995. In 2015 it is in use as a house, still retaining its date tablet and clock.