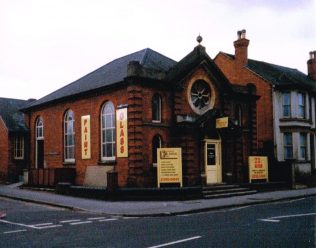 Ash Road Primitive Methodist Chapel on the corner of Ash Rd and Herrett St dates from 1885 and was known as “Ebenezer”.  It had six foundation stones all bearing the date 14th October 1885.

The 1885 Primitive Methodist magazine records  the laying of the memorial stones for the chapel, school room and vestries. The site was close by the old public house in which the Aldershot mission began some years previously. In 1885 that was occupied by “our friend” Mr S Terry for “his business and residence”.

The new chapel was expected to cost £1,000 of which they already had £700.  Aldershot station was complemented for having paid off £900 of chapel debt in the previous year, with special mention going to Messrs Terry, Beesley and Sergeant Musselwhite.

It served as a place of worship until 1958 when the church executive sold the old building and built a new church at the junction of Stone St and Herrett St.

The opening of the chapel is commemorated in the following year’s magazine.  We learn that the society had worshipped previously in the Jolly Farmer public house which had been acquired by Mr Terry.

Google Street View shows a sequence of pictures from an empty building plot to a completed residential development on the site.