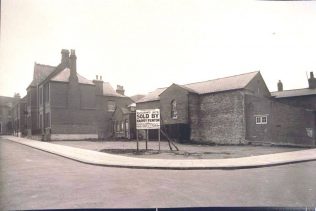 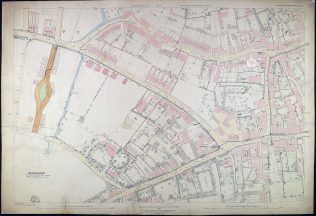 BASINGSTOKE: Flaxfield Road chapel. Membership figures grew, and by September 1847 there were 23. After September 1847 membership is given only for the whole “Basingstoke Branch”, beginning with 106 full members, and 7 on trial. Membership returns for individual societies begin again in the account book in March 1851, when Basingstoke claimed 24.
In time land was purchased in Flaxfield Road and a chapel was built. Opening services were held on 25th, 28th, 29th March and 4th April 1847 ; one of these meetings was a tea meeting. It was felt that “a gracious unction attended the several discourses and addresses.”
At the 1851 religious census Basingstoke recorded 40 in attendance in the morning, 40 in the afternoon, and 100 in the evening. The chapel was enlarged in 1863, and the photo (supplied by the Basingstoke History group on Facebook) shows the enlarged chapel after it closed and a small addition with a sloping roof had been built on to the front.
In 1902 the congregation moved to a new church at the top of Sarum Hill, and the Flaxfield Road chapel was demolished in or about 2006.
The photograph has been confirmed as being the Flaxfield Road chapel by Prof. Richard Holton, whose family owned the building some time after it closed. Please note that an earlier photograph was posted on this website as the chapel, but was in fact the Freemason’s hall opposite the Sarum Hill church

Prof Richard Holton has provided the following information relating to the sales of the building in 1902.

“FLAXFIELD. BASINGSTOKE. Sale of the valuable FREEHOLD PROPERTY, Known The Primitive Methodist Chapel. Easily convertible into Stores or Business Premises, comprising the brick built and slate BUILDING, 50ft. by 27ft. 6in., and large room adjoining, lying back 30ft. from the Flaxfield-road. Suitable for the erection of a Shop. Also the COTTAGE adjoining, in the occupation of Mr. A. Golding. MR. ALFRED W. TYRRELL has received instruction from the Trustees of the Primitive Methodist Chapel to SELL by AUCTION, at the Red Lion Hotel, Basingstoke, Wednesday, 13th August. 1902. three o’clock,—The above PROPERTY. Particulars and conditions of sale may be obtained of the Auctioneer. Basingstoke.”

Hampshire Chronicle 31 October 1903
“Opening of Lads’ Institute. — Mainly through the exertions of the Mayor (Alderman Wadmore) a Lads’ Institute has been founded, and the premises in Flaxfield-road formerly used as a  Primitive Methodist Chapel having been secured for the purpose, the rooms fitted up, and gymnastic appliances procured, the building was opened by his Worship Wednesday evening in the presence of numerous gathering of ladies and gentlemen. Speeches having been made by the Mayor, who presided, the Rev. A. C. Tarbolton, and the Vicar, the secretary (Mr. Coxon) made a statement shewing that the room was opened under encouraging prospects. Afterwards gymnastic and musical entertainment took place, the gymnasts being four men from the military gymnasia Winchester, under Sergt. Mitchell. A vote of thanks for the Mayor for the great interest had shown in the Institute was passed by the motion of Mr. Noakes, after which 53 lads enrolled themselves as members, and there will probably be a considerable augmentation in the course of short time.”

That didn’t resolve who owned it though, since a subsequent article makes clear that the Lads’ Institute were only renting it, had only done so on a one year contract, and were looking for funds to renew. I don’t know whether they did; after that the trail goes cold.