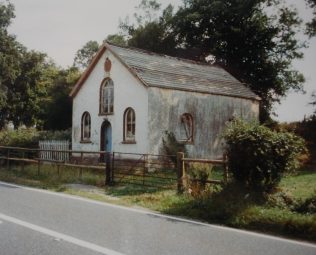 Bowyers Primitive Methodist chapel was opened in 1869 and served until 1977.  At the time of Keith Guyler’s photograph in 1988 it was derelict.

I do not know exactly where this chapel was; all I know is that it was part of the Petersfield, Liphook & Haslemere circuit and Bowyer’s Common is north east of Steep parish which is north of Petersfield.  Can anyone track it down please?

There is an account by Samuel Harding of the opening of the chapel in the Primitive Methodist magazine.

“Buriton Mission.— Bowyers Chapel was dedicated to the worship of Almighty God on Sunday, Juiy 18th, 1860. The Rev. S. Antliff, Missionary Secretary, delivered three admirable sermons. The afternoon and evening services were held in a tent, to accommodate the large congregations. On Monday afternoon Mr. Antliff preached again in the chapel, which was crowded. About 150 sat down to tea ; at the evening meeting the R-svs. S. Antliff, S. Harding, R. Fothergill, Messrs. B. J. Forder, J. Blunden and W. Castle delivered addresses.

The chapel is conveniently situated for the scattered population. It occupies an elevated position ; will peat 100 persons—forty sittings to let, (the whole are taken,) sixty free ; estimated cost, £140 ; received nearly £60. Another tea- meeting, bazaar, &c., will be held after harvest, so that not more than £50 will remain as debt at the end of the year.

The land was given by J. Bonham Carter, Esq., M.P. A. Sabbath-school has been commenced under very encouraging circumstances. Very great assistance was rendered by the farmers in carting materials gratuitously. There has been an accession to our numbers of late. Samuel Harding.”