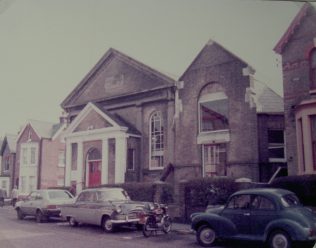 Cowes West Hill Primitive Methodist Church was a very impressive building opened in 1889.  It replaced an earlier chapel that was too small for a growing congregation. The new chapel was estimated to cost £1,300 of which they expected the majority.

The March 1889 Primitive Methodist magazine contains a note about the laying of the foundation stones which display the following inscriptions:

The September 1889 magazine records the opening of the chapel. It is described as “unquestionably an ornament to the town from an architectural point of view”

After closure in the 1960s it became used as a public library.

There was another Primitive Methodist Church in Market Hill.