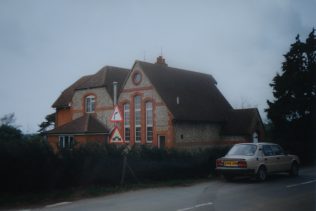 The notes with Keith Guyler’s photograph tell us that Micheldever Station Primitive Methodist chapel was opened in 1886 and included a school. However, it cannot be the building in the picture as the Primitive Methodist magazine of 1886 tells us that the new chapel has been opened at Micheldever railway station, in the area known as Canada was a tin one.  Ordnance survey map for 1894 shows we the tim chapel separated from the road by a short row of houses.  By the 1908 map the chapel had a new site by the roadside.

The chapel in the picture was closed in the 1950s and by the time of Keith Guyler’s photograph in 1993 had been converted into a house.

The location is clearly marked on the 1945 Ordnance Survey sheet 168 Winchester but I can’t find it on Google Street View in July 2011.  Can anyone help?