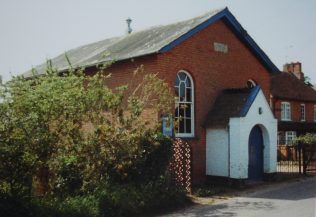 The notes with Keith Guyler’s photograph say that Newtown chapel in Hampshire chapel was opened in 1867 and closed in 1991.  That said there are at least 4 places called Newtown in Hampshire alone, so I had no idea initially which this one is.

Thanks to Chris Neal for confirming that this chapel was at Newtown Road, Awbridge SO51 0GJ. At that location there is a Chapel House but it doesn’t look anything like the picture.  There is however a house being built next to it. See Chris’ comment below for explanation and more information.

The 1845 Primitive Methodist magazine contains a note that they had built a movable Primitive Methodist chapel at Newtown (and a similar one at Sandhill Heath) .  A movable chapel was required becuse they had been turned out of two cottage preaching houses because of opposition “through the intolerance of Puseyites and country squires”.  One man whose cottage it was lost his job and expected to lose his home  for the same reason.