a chapel, and a local preacher 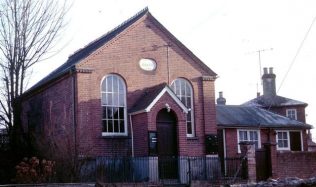 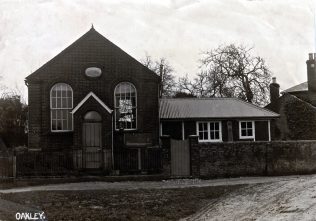 Before 1866 the Primitive Methodists in Oakley met in two cottages, later known as Hunters Moon. A plot of land was purchased for worship in 1866, opposite the village pond, and the chapel in the photograph was built. It is in the Basingstoke Circuit.

All we like sheep have gone astray; we have turned every one to his own way; and the Lord hath laid on him the iniquity of us all.

An elderly local preacher called Leonard Wardell had, I think, been grooming me with a view to the pulpit, inviting me to accompany him on his services and to read the reading, or lead the service, or give a testimony of my conversion. That day he had invited me to preach the sermon and he would lead the service. We arrived on my motorbike, with him on the pillion seat.

He always found time for me, and would take me into his sitting room in Basingstoke, open the Bible to me, and pray with me, as well as guiding me into a preaching ministry when he felt the time was ripe. I record my gratitude to him.

From the journal of Isaac Septimus Nullis, 1866

I assisted Br[other] G[eorge] Wallis in the opening Services of a neat little Chapel at East Oakley, in the Basingstoke Circuit. At night the power of God was blessedly felt, and six souls were rescued from the hands of the destroyer.