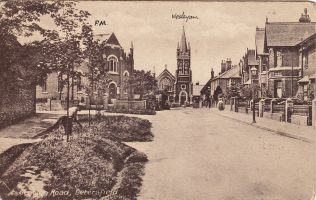 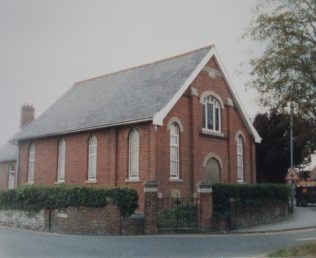 On this picture of Station Road, Petersfield, you can see the Wesleyan and Primitive Methodist Churches in close proximity.  Someone, probably my grandfather, has helpfully marked out which is which, though I think we could have guessed!  This photograph will date back to 1912-15, when my grandfather, Rev Frank Davidson, was a minister in Petersfield.

Editor’s note (CH) The Chapel was opened in 1902. The stone across the front reads ‘Primitive Methodist Coronation Chapel’. It was called the Coronation Chapel because of the coronation of Edward VII, which took place on 9 August (initially planned for 26 June but delayed by the King’s illness). The memorial stone was laid in May, and the Chapel opened in October.  Source: Methodist Recorder, 31 May 2013