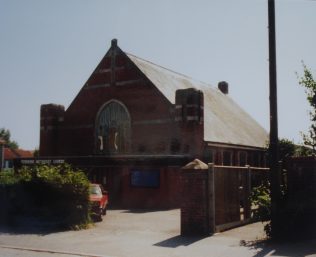 The notes accompanying Keith Guyer’s picture say that the first Purbrook Primitive Methodist chapel was opened in 1879.  It was replaced in 1932 – one of the last buildings before Methodist union.

Google Street View records its disposal.  In 2009 it is in use as Purbrook Methodist chapel.  In June 2011 it sports a “for sale” sign.  By October 2014 it has become the Purbrook Masonic Centre available for conferences and meetings with (whisper it softly) licensed bars.