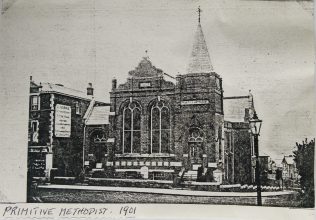 The Primitive Methodists in Ryde first built their own chapel in 1841 in Star Street on  the site later occupied by a carpet shop. You can read about it here.

In 1902 the society opened a new Chapel on the corner of High Street and Well Street.

In 1942 the Primitive Methodist chapel closed and the congregation merged with the Wesleyans in their large chapel in Garfield Road.

The Primitive Methodist chapel was acquired by the local authority and became used mainly as a Youth Club. On Google Street View in June 2015 it is for sale; what has happened to it?  A note on the sales brochure says that although it is not in a conservation area it is unlikely that permission for its demolition would be given.

The photograph of the chapel was in the Englesea Brook collection of pictures and postcards but unlabelled; thanks to RoseC for identifying it. Rose also passed on a link to a photo of the chapel taken in 2015 on the Geograph website at:-

There have been changes to the building between the Englesea picture and 2015.  The spire on top of the right hand turret has disappeared and the principal entrance doors in each of the turrets have been bricked in. The way in now is through an imposing set of central steps – impressive but not ideal for accessibility.