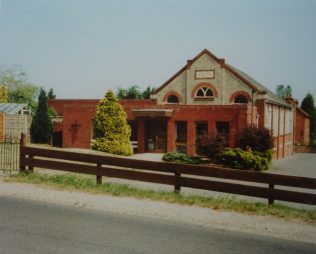 The website of the Shirrell Heath Methodist church tells us that In the 1850’s and early 1860’s people from the Southampton Primitive Methodist Circuit / Winchester Mission met in a small cottage in a lane off the High Street or in the open air.

In 1864  a brick chapel was built on the High Street. It was called Zion Chapel and cost £134. The Chapel was used for over 100 years, serving as the Sunday school room from 1917 when the iron Chapel was erected. It was then replaced by the current brick building in 1930. In 1975 the old Zion Chapel was pulled down in order that the current hall could be built, which opened in 1976.

Keith Guyler’s notes date the first Shirell Heath Primitive Methodist chapel as opening in 1870.  Is that the same chapel? Certainly the 1930 building is the same.

The chapel in Keith Guyler’s picture was opened in 1930 and at the time of his photograph and now in 2015 is still active.  There are interesting pictures on the chapel website.  Our Meon Valley correspondent says that it is a very active |Society.