You are here: HomenextChapelsnextHampshirenextSnextSteventon, Hampshire 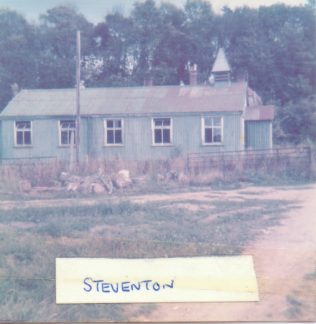 “Mitcheldever” is how the village of Micheldever was often spelled in the past, including in the name of the Primitive Methodist circuit.

The chapel was opened in 1903. Nearby houses had been built in about 1890, and the chapel was built with corrugated iron behind numbers 1 and 2 Pond Cottages. It was reached by a public footpath leading from the road.

The information comes from “Steventon: Jane Austen’s Birthplace” by Richard Tanner (2008); and (with the photograph) from an elderly local preacher in the present-day Andover Circuit – so perhaps Steventon was eventually transferred to that circuit.