A chapel with some mystery about it. 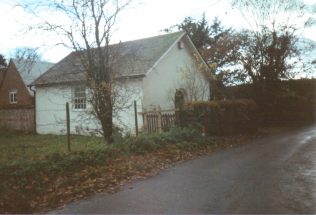 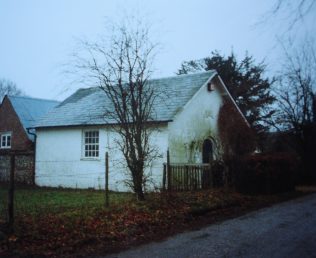 We learn from Kathleen Innes’s Bourne Valley Anthology (Andover, undated) that Upton (the one near Linkenholt) was a centre of both farming and malting, was renowned for its strong ale, and was dominated by seven men known as “village champions”, one of whom was known as a thief, another for his use of bad language. These men were at a tree in the village centre one Sunday afternoon – we are not told in exactly which year, but I suspect it was 1831 – when five soberly-dressed strangers approached the tree, singing a hymn. Their leader was “a minister named Russell”, which means of course the Primitive Methodist pioneer, Thomas Russell. He prayed, and then began to preach. Following the preaching, as they were leaving, they were booed and pelted, but they returned night after night, and were joined by a woman preacher, a Miss Godden.

One of the “champions” was converted, a man named Thomas Cummins, and soon became a preacher himself. After becoming a well-known Primitive Methodist preacher in the area, he died in Newbury in about 1876.

An 1849 Primitive Methodist Circuit Plan lists 38 places, spread over a wide geographical area, including Upton. Membership rose from 16 in 1837 to 29 in 1850. Oddly, in the 1851 Religious Census there is no Methodist meeting recorded for Upton, only an “Independent” (i.e. Congregationalist) chapel, built in 1839, attended by 40 people in the morning, 73 in the afternoon, and 70 in the evening. This church was under the pastoral care of William Wainright, the Congregational (“Independent”) minister at Hurstbourne Tarrrant.

A gentleman I know only via email kindly wrote to me saying:

I looked at the Hampshire Congregational Union Annual Reports from 1880 to 1900. From these I got the impression that Congregational activity in Upton was spasmodic. The only specific references to the village were as follows:

1882: ‘Mr Charrett [the evangelist from Hurstbourne Tarrant] has recently commenced to preach on the Lord’s Day at the neighbouring village of Upton, where he also visits from house to house and conducts a week-evening service.’ There is no mention of the building in which preached and conducted services.

1885: ‘A special mission was conducted in the autumn at Upton …’

1887: Mr Jones ‘conducts a service in Upton every Sunday afternoon.’ Again there is no indication as to where the service was held.

There are no references to Upton in these reports during the 1890s.

To thicken the mystery, a Congregational historian wrote to me saying that:

As late as 1874 the Congregational Year Book says that Hurstbourne Tarrant and Upton are being served by an (unnamed) Evangelist, but in 1875 the same arrangement is given for Hurstbourne Tarrant only, with Upton no longer mentioned. Even then, there is a note saying that A. Johnson is “Resident without pastoral charge” at Upton. Perhaps this was the point when the Methodists were able to take over the chapel building.

In 1860 and 1905 Upton is in the Primitive Methodist Andover Circuit preaching plan.

The chapel in the photo has the date 1839 over the door, but no denominational identification. However, it is identified as “Independent” on old large-scale Ordnance Survey maps. It would seem that it passed into Primitive Methodist hands some time around 1875 or even 1890 – but those are only guesses. An elderly Methodist local preacher used to preach in it when it was on the Methodist circuit plan, and kindly allowed me to use his photograph. The chapel closed in 1963.

So here are the mysteries:

Maybe someone reading this can throw some light on the story of this society and their chapel.