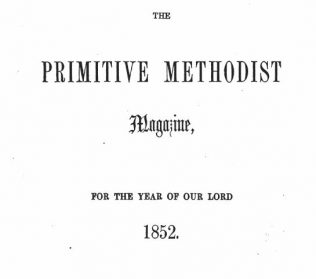 In the 1852 volume of the Primitive Methodist magazine there are 55 openings, re-openings and foundation stone layings reported.

At Knighton  a new chapel was needed because  the society previously met in “a room over some stables which, in the summer, proved very offensive.”

At Langrickville near Boston they previously used a barn but there were times when the farm machinery got in the way.

Many of the chapels were self built; at Radstock they quarried their own stone.

Most of the chapels were small, cost a few hundred pounds and served rural areas; a major exception was Burnley Bethel which was huge and cost £2,100

A regular way of fund raising was to hold a public tea meeting with the food (“trays”) provided by the women of the society. At Thirsk one tray was provided by a man – and it was remarkable enough to be noted.