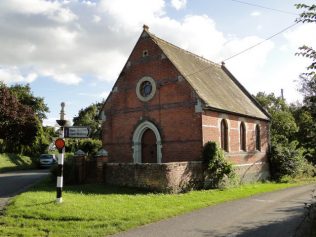 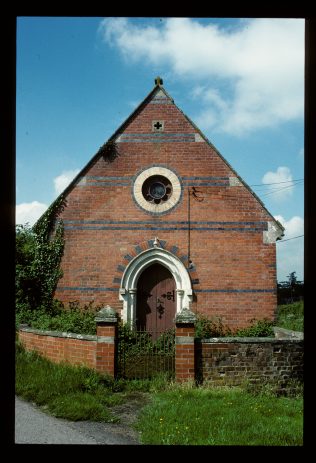 Prior to the opening of the Chapel in 1870 the Primitive Methodists had used from 1858 the Quaker Meeting House which lies just to the South, seen on OS maps below.

The date of closure has yet to be found.

Plans were submitted for conversion of the Chapel into a house in Feb 2012.

Herefordshire Through Time web site states :- Almeley Chapel is situated at Almeley Wootton, which is ¾ of a mile from the village of Almeley. It is a polychrome (multicoloured) brick building with a pyramid-shaped roof, arched double doorway and round window above. On each side wall are three windows.

At one time the chapel had a resident preacher – the Reverend Hardy – who lodged with a local couple.

Camp Meetings were regularly held in a field adjacent to the chapel. A Quaker Meeting House lies only some 200 yards below the chapel and there was often friendly interaction between the two. When the Quakers held their monthly meeting, which would last all day, the Methodist Chapel was used to serve lunch. This favour was returned when the Methodist Chapel was closed for refurbishment as the Quakers allowed them to use their Meeting House for services.

Kelly’s Directory 1913 Hfds, P 19. ALMELEY There is a Primitive Methodist chapel at Wootton, built in 1870.

On the 1974 OS Herefordshire 1:2,500 map the building is marked as Almeley Meth Chap