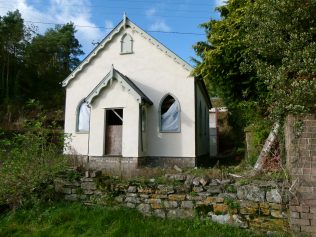 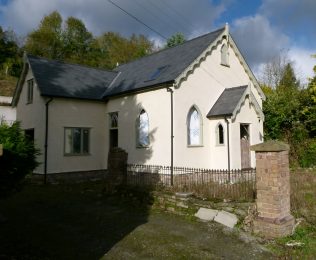 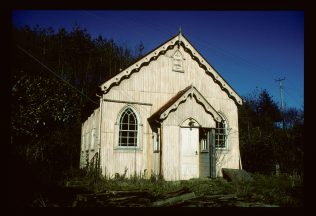 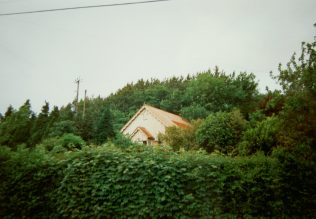 Lies on unmade Bacon Lane to the west of A4110

In 2013 the building is in process of being re-built from its original corrugated iron construction that may be viewed on Google Street View which was taken in 2009. It has been rebuilt with rendered walls and a slate type roof. It has used the original carved barge boards. An extension has been added to the South West elevation. It is not yet known when the chapel closed after 1972-5. It was up for sale in 1983.

Herefordshire Through Time web site states :- Shown on the 1840 tithe map as a house and garden under the ownership of Reverend T. T. Lewis. The date stone above the small porch reads: 1884 Methodist Chapel.

The chapel is found close to the centre of Aymestrey village, not far up a slope opposite the Village Hall. The building is of corrugated iron that has been painted a light pink colour. The chapel is now closed and in quite a run-down state. The low wall at the front is falling down and the doors are hanging off their hinges.

At one time the chapel would have been an attractive building with beautiful views over fields and woodland. The ornate barge boards have weathered reasonably well and stained glass can still be seen in the windows. It is a shame to see such an quaint chapel in such a state but the location and the building still inspire.

Herefordshire Through Time HER Monument search SMR Number : 31434 states :- Methodist chapel. Shown as a Methodist Chapel (Primitive) on the 1st edition. Shown as 622 on tithe map, house and garden. Presumably this was converted or rebuilt in the second half of the 19th century as a chapel.

The small Primitive Methodist chapel is on the western side of the village road on the southern outskirts of the village. The building almost fills the small plot of land in which it is built. The chapel was built in 1884, towards the end of the Primitive Methodist revival in north Herefordshire, and there seems to have been some reluctance from the Circuit when it was suggested that a chapel was required. There were 40 lettable and 80 free seats. Although there were only eight members it was a successful foundation and averaged 100 people at Sunday services. The total cost of the building was £258 13s 5d. Aymestrey Chapel has a corrugated iron skin with the internal walls, ceiling and floor being of timber. It is 8.2m long and 6m wide internally with the pulpit at the eastern end. The western wall has two two-centred windows, with alternate red and blue glass framing the clear glass centres, symmetrically arranged around a small external porch. The north and south sides each have three windows to the same design as those on the west but with clear glass. The east wall is completely blank. A low stone wall with brick pillars and a wrought iron gate led into the grounds from the lane. An internal porch allows access to right and left and the building is heated by an off-centre “turtle” stove. The simple pine pulpit with panels was still in place, together with the bible inscribed “Presented by A.S. Newman, Dec 21st 1884”, when the chapel was visited. The chapel was one of three put up for sale in 1983 by the Knighton and Leintwardine Methodist Circuit. It was considered to be the most difficult building of the three to sell as it was not practicable to convert it to a house. The prospectus could only suggest that it was suitable for a variety of storage/light workshop uses, subject to planning approval.

On the 1975 OS Herefordshire 1:2,500 map the building is marked as Aymestrey Methodist Chapel.