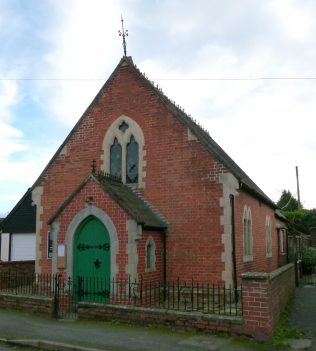 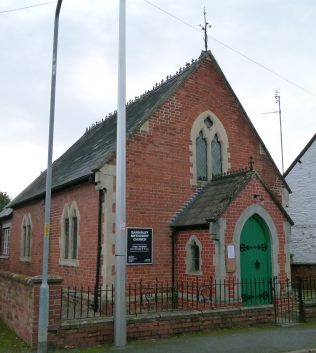 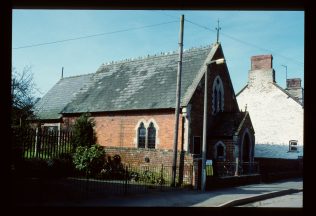 The first meeting place in Eardisley was at the home of John and Elizabeth Saveker which became known as Chapel House. John was the grandson of the Rev. Thomas Rees (T Rees was also third great grandfather of the writer) who was a prominent independent minister at the Huntington and Gore Congregational Chapels also master of Goff’s school which used part of Huntington Chapel as the school room. Thomas Rees was shot at whilst preaching to a crowd at Eardisley. John like his grandfather walked many miles around the borders of Herefordshire and Radnorshire to preach to outlying communities. John married Elizabeth Underwood of nearby Dilwyn who was an evangelist who had preached in South Staffordshire and the boarder counties, also taking in other parts of the country. Their wish was to form a Primitive Methodist Community in Eardisley and surrounds perhaps to finish his grandfather’s conversion work. Thus it started in their front room. They collected the money together with Mr & Mrs John Jay in order to build a Chapel. The Chapel was to be constructed in the garden of their house.

In 2013 this is an active Methodist Church which is part of the Southern Area of the Shropshire and Marches Methodist Circuit.

Eardisley Methodist Chapel was opened in 1867, prior to that there was a fellowship group which met in the cottage next door. This was owned by Mr and Mrs John Saveker. John was a local preacher who walked miles along country lanes to take services. His wife Elizabeth had been a teacher but she became an evangelist for the Methodists, preaching in England and Wales, though most of her work was in the Western Counties and South Staffordshire. The Hereford Journal at the time said ‘As a preacher she was much sought after, being highly gifted in oratory, of great talent and intellect. She could move a congregation to tears’

Mr & Mrs Saveker and others began a fund to build a chapel and the Savekers generously gave part of their garden as a building plot. The foundation stones were laid in 1865 and opened on 4th August 1867, the first minister being Rev George Middleton. A loan was made by one of the Trustees and others of the congregation made donations to cover the final building work. A porch was added to the chapel in 1933 and dedicated to the memory of the first 11 Trustees.

A generation later another member of the family Mrs M A Triffit, donated money to enable the chapel to build a Sunday School room on the back and this was opened on 11th April 1950 by Mrs Triffit and her great niece, who still lives next door but one to the chapel.

Over the years the chapel has been in several different circuits, Hay on Wye and Swansea District and latterly Leominster Circuit. In the 1950’s it had a thriving Sunday School which took part in the District Scripture Exams, winning two shields which still hand in the chapel today.

Nowadays we have a membership of 2 and a regular congregation of 15 to 20. Sadly we no longer have a Sunday School. Our members come from several of the surrounding villages. The school room now has kitchen facilities and a toilet which was recently refurbished in 2011 to improve insulation adn storage. Our fellowship continues after the services as we meet in the School room for coffee and a chat, the room is also used for Harvest Lunches etc.

It is thanks to faith and foresight of the Saveker family that this church came into being and we strive to uphold their principles and to keep a Methodist presence in the village of Eardisley.

Herefordshire Through Time web site states :- The plot on which the chapel is built was once part of the garden of the neighbouring cottage, which is now known as Chapel House. At that time the cottage belonged to local preacher John Saveker and his wife Elizabeth. Prior to the building of the chapel Methodist services had been held in a room at Chapel House.

The chapel was built in 1867, and in 1934 a porch was added to the front of the building and dedicated to the memory of the first trustees.

Electric heating was installed in the chapel sometime after World War II.

In 1983 the chapel was still opening its doors for worship.

Methodist Church, Statistical Returns, 1940 – Eardisley does not appear in Birmingham District, may be Swansea under Hay.