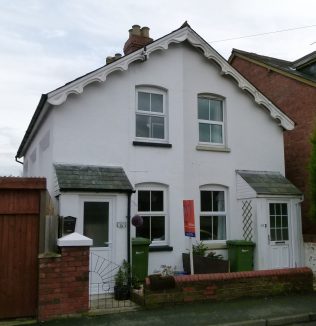 The foundation stone was laid by the Rev. G Mitchell on Thursday 26 Sept.1867. The site was given by Mr William Hughes. The builder was Mr Davis of Bartonsham, who had been awarded the contract for £150, with the building due for completion by the end of November 1867. The building was to be 26 feet long by 21 feet wide, of plain brickwork with Bath stone facings over the door and front windows.

The Chapel would later close upon the opening in 1902 of the larger Chandos Street Chapel (300 sittings) which lay very near by. In 2014 the building is two dwellings, the left hand one is called ‘The Old Chapel’.

Herefordshire Through Time web site has no results.

On the 1888 OS Herefordshire 1:2,500 map the building is marked as Methodist Chapel (Primitive).