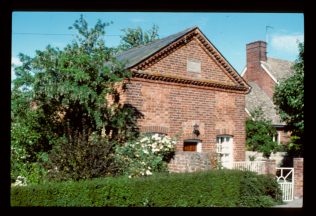 The Herefordshire Through Time website describes the chapel as follows.

A solid brick building with Welsh blue slate roof. The interior measures 25′ 6″ x 17′ 6″, it has five windows and a boarded floor. The building was acquired by lease dated 11th August 1857.

The chapel has been converted into a dwelling.

The 1858 Primitive Methodist magazine includes an account by William Guillim of the opening of Kingstone Primitive Methodist chapel. After unsuccessful missions by the Hereford circuit, a society was established in 1852 by Rev Tillotson, Superintendent of the circuit, and Mr Smallman, his successor. This was difficult “as clerical influence was strong” but the society grew.

William Guillim, who was stationed in Kingstone in 1856, secretly bought the house he was living in as a possible chapel site. It was next to the church and when his plan became known “some of the Church party exerted themselves to procure ground not so close to the church“. The rector used his influence for J.S. Gowland to provide a site further away on a 300 year lease at a rent of one shilling a year. With the help of Henry Horn, the new chapel was built.

The chapel opened on November 22nd 1857. Preachers were Mr Guillim and Rev T Hobson of Hereford and congregations were so big they could not all get in. Raising the money was not easy as “our society here is composed mainly of the labouring class.” Tea meetings, including one with preparatory sermons by Miss Buck, begging, donations, including one from Mr Jones of Ludham, and local farmers carrying the materials for free, helped.