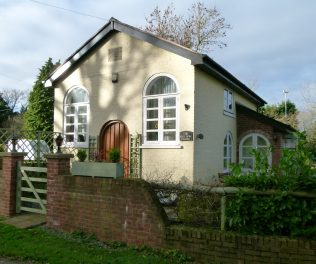 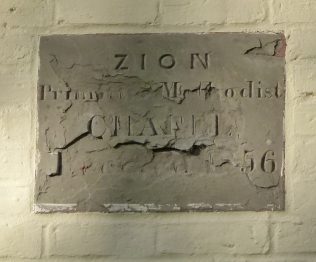 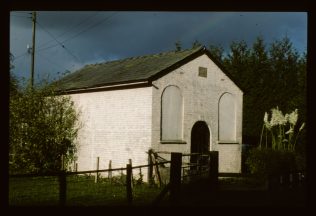 In 2013 the Chapel is now a dwelling. The wall plaque is now weathered but states “Zion Primitive Methodist Chapel ???? ??56”. The building now has extensions added.

Ledgemoor chapel is a brick-built building, which once had a white exterior and black woodwork, designed to blend in with its surroundings. There are only two windows, which are at the front of the building on either side of the door.

Over the front door is an inscription which reads “Zion Primitive Methodist Chapel 1856”.

The Minutes for the Quarterly Meeting of the Weobley Branch on 4th August 1843 record that there were prospects for two new chapels in the area, one at Lyonshall and one at Ledgemoor. Six months later mention is made of a preaching room at Ledgemoor, which indicates that a barn or room in a private house was being used for meetings.

In 1856 land was secured for the chapel site and a chapel was built that seated 110 and cost £100. That same year services were held twice on a Sunday, at 2.30pm and 6pm, and by December the members of Ledgemoor chapel had been asked by the Circuit Meeting to provide a Sunday School. This action was not carried out as three years later a travelling preacher was asked to make enquiries at Ledgemoor on the subject of establishing a Sunday School. A similar request was also made the following year.

Over the years the membership for Ledgemoor Chapel remained fairly steady:

However, as with many chapels the membership fell and consent was given to close the chapel in March 1966. The building was then sold. The chapel has remained in private ownership since.