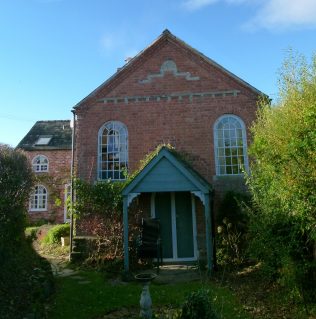 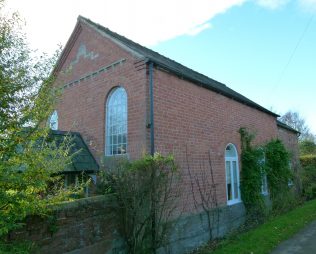 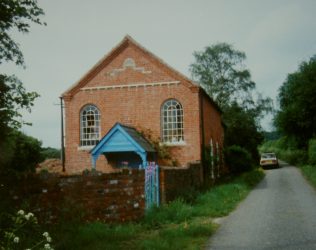 In 2013 the building is a dwelling which has been extended from the original footprint to the South and West. The wall plaque stones state “Ebenezer – Primitive – Methodist – Chapel – A.D. – 1864”.

Herefordshire Through Time web site states :- This brick chapel is located about 4 miles south-east of Presteigne and close to the village of Staunton-on-Arrow. The chapel is of red brick and has a slate roof. It has been built with its side facing the main road. The walls were once whitewashed. At the front of the building is a porch with a round-headed window on either side. Over the porch are the words “Ebenezer Primitive Methodist Chapel 1864”, inscribed in a scroll decoration.

In his book Pastor at Pembridge, G.L. Harriman remembers Noke Lane Head Chapel in the 1950s: “The main support came from the Baptist family at Grove farm… One could generally count on a congregation of 10 to 12 there”. He also mentions that the Sunday service was an afternoon one.

The chapel was originally a Primitive Methodist Chapel and there was a flourishing Sunday School there in the 1920s. Camp Meetings were also held in a field behind the chapel and then later in a field between the Forge and Titley, and after that by the side of the railway line.

In 1920 the chapel was licensed for marriages, and electricity was installed in 1958. In later years services were shared with the chapel at New Street, Lyonshall, before Lyonshall Chapel was closed.The congregation at Noke Lane Head began to dwindle and on 6th July 1984 the building was sold for £5,800.

On the 1974 OS Herefordshire 1:2,500 map the building is marked Ebenezer Methodist Church.