On West side of A4110, Kingsland Civil Parish, Herefordshire 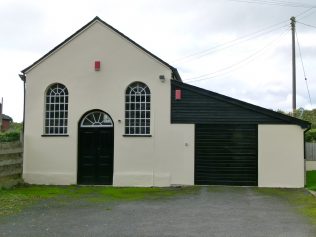 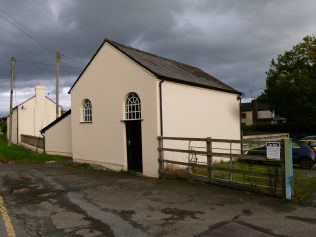 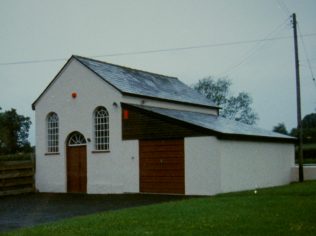 In 2013 the building appears to be used as a garage / store. On Google Street View for 2009, it looked like a car repair workshop. Since then it has been renovated somewhat and looks very neat. The building has been rendered over since the report below, covering the wall plaque. It is not known when the the lean to addition on the North side was added, or when the single door was added to the rear elevation.

The foundation stone was laid on Monday 22nd October 1860. A full report was given in the Hereford Times, Sat 27th October 1860.

Herefordshire Through Time website states :- At the junction of two roads leading from the A44 towards Kingsland, opposite the car and auction salesrooms. It stands with its front to the more major of the two roads. The inscription on the building reads “Primitive Methodist Jubilee Chapel 1861”. It is a small brick building with a slate roof and double doors. Above the door is a semicircular window. On each side of the door is a window with a semicircular head.

There was a Methodist Society in Shirlheath for many years before the chapel was built. In 1838 it had ten members, and eight members in 1852. On the 1841 Tithe Map the area is marked as allotments and arable and belonged to John Miles. The land for the new chapel was conveyed to the Methodists in 1857 and by 1861 the chapel had been built.

By 1929 attendance was such that there were two services on a Sunday. However on 23 March 1966 permission for closure of the chapel was granted and the building was sold for £150 to Messrs W.G. and R.M.J. Williams.

The building is now in use as a private dwelling.

On the 1886-7 OS Herefordshire 1:2,500 map the building is marked as Methodist Chapel (Primitive)