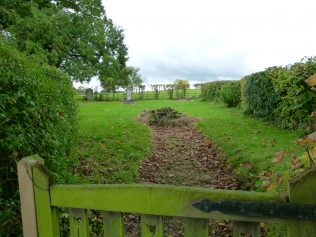 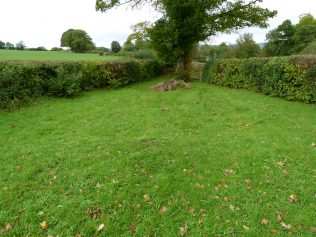 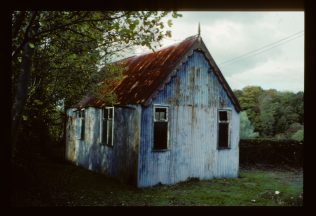 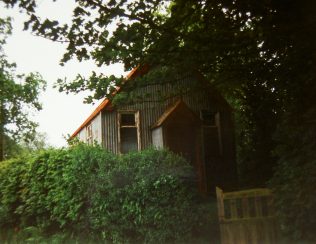 The site lies on the south side of The Hundred Lane. In 2013 the site is clear with a small pile of brick rubble, it is well cared for with graves to the eastern end.

Herefordshire Through Time website states :-  Just off the A49 Leominster to Shrewsbury road, down Hundred Lane and some three miles north of Leominster, stands the Hundred Chapel.

The chapel stands in the middle of a triangular plot with a small graveyard to the rear which holds about 20 graves.

Originally the Hundred Chapel was a Primitive Methodist Chapel and one of the later ones to be built in the Leominster Circuit. On 10th April 1905 it was proposed that a place of worship be built at The Hundred. Mr. Probert had promised a suitable piece of ground as well as a donation of £10. There were further donations of £5 from Mr. W.J. Owens of Prospect Cottage, Stockton, who also promised to erect the building. The total of additional donations came to £24 6s 0d. The plot was part of an orchard known as “Nursery Orchard” and extra land was later bought for £10 from Mr. Probert, making a total area of 51 x 51 x 39 ft.

The deeds of the chapel show that the site was transferred on 30th September 1905 and the land for the burial ground on 22nd February 1907.

The Hundred Chapel was recorded as a place of worship on 15th June 1906. The building was constructed out of corrugated iron with a steeply pitched roof and shaped barge boards.

In the 1930s there were services at 2.30pm and 6pm each Sunday. In 1963 the Hundred was asked to amalgamate with Leominster as part of the Border Commission Experiment and eventually the chapel was closed.

On the 1928 OS Herefordshire 1:2,500 map the building is marked as PrimitiveMethodistChurch.