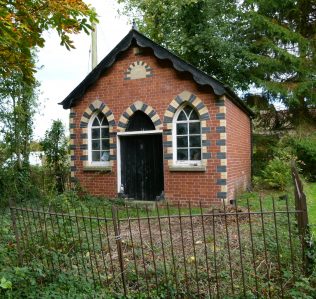 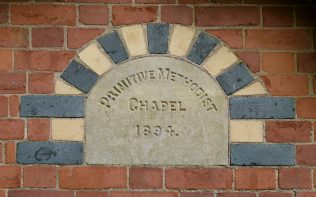 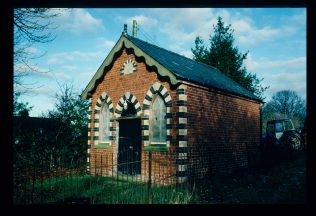 In 2013 it is not clear what the present use is or in whose ownership the building lies. It has clearly had it’s front door widened in recent times, by evidence of the blue bricks still on the threshold.

Herefordshire Through Time web site states :- The chapel is located approximately four miles south-west of Leominster, in the hamlet of Upper Hill on the western edge of a ridge that leads to Dinmore Hill. This is one of the smallest chapels in the Leominster area, being approximately 20ft x 16ft, and is constructed in red brick with a slate roof.

The building has no porch and there is a large window on either side of the door. The windows and the corners of the building are edged with polychrome (multi-coloured) bricks. Above the door is the inscription “PrimitiveMethodistChurch 1894”. Although this is one of the later built chapels, Upper Hill featured in the Methodist Circuit Plan for this area for many years before.

The ground for the chapel was purchased from William Harris, and it was built by Mr. Watkins who received £97 12s 3d for the work. An “Opening Tea” was arranged which cost £3 5s 3d, but a collection was taken to offset this cost.

In 1838 there were 29 members but just over one hundred years later this number had dropped to 18. In 1856 the weeknight service was stopped, leaving just the Sunday service. By 1899 the chapel had a Sunday School, and in 1901 new supplies were bought. In 1948 Upper Hill Chapel had been taken off the plans for the 6pm circuit but it was back on again by the following year.

Between 1923 and 1933 all day Camp Meetings were held at Upper Hill, probably because of the inspiring views which it looked out upon. These meetings probably helped to raise funds for the chapel, as did a number of concerts that were held there.

The chapel finally closed sometime after 1976 when the last accounts entries were made, and on 27th July 1984 the chapel was sold for £1,000.

In 1997 the chapel at Upper Hill was placed on the market with Bill Jackson Estate Agents for between £3,000-£5,000. At this time it was in need of some repair work and there was plastic sheeting instead of glass in the windows. Since it has been sold it has been renovated in keeping with the original style and the glass has been replaced.

An earlier chapel site has not yet been found, but there is a “Chapel Farm” just to the east of the chapel site.