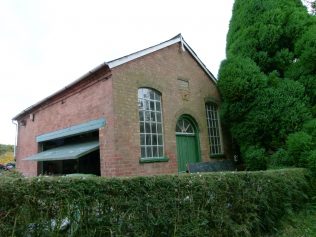 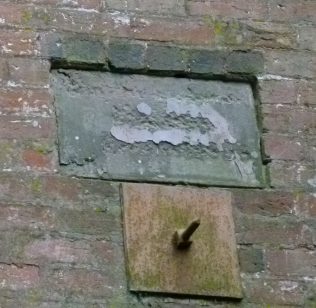 In 2013 the building is being used as a garage / domestic store. It was opened on Sunday 22nd August 1858. A report appeared in the Hereford Times.

The wall plaque is inconclusive, but seems to confer with 1858 opening.

Herefordshire Through Time website states :- This chapel is located just outside the village of Westhope near Canon Pyon. The chapel is marked on the 1st edition OS map of 1890 but is missing from the 1984 edition. The chapel is of brick with a slate roof. Above the front door is an inscription which can no longer be read, and on either side of the door is a large round-headed window, which is the same as the opposite wall.

Before the chapel was built the Methodists at Westhope would meet in private houses, but in March 1858 a Miss Sarah Reynolds provided the land and the chapel was erected for £95 in the same year, with a seating capacity of 135. At that time there were 28 members in the local society. Attendance was alleged to have been 100 on a Sunday and 80 at the weeknight services.

Originally the chapel had no Sunday School, but one was established by 1866; there were four teachers and 35 scholars. By 1882 the chapel had two services on a Sunday – at 2.30pm and 6pm – with an evening service every Thursday.

The membership at Westhope Chapel slowly dropped and by 1933 there were only 10 members. Eventually the services stopped and the chapel building was sold to a Mr. Williams.