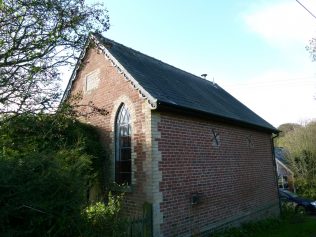 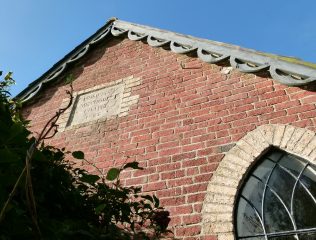 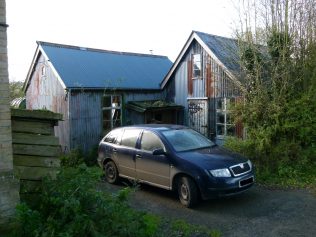 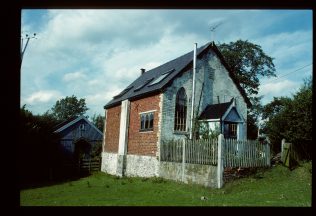 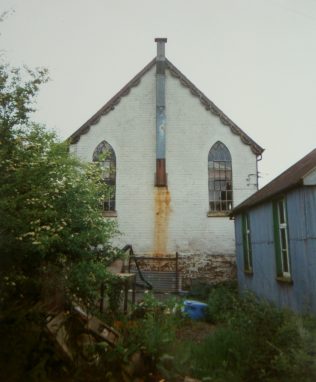 Lying at 968 feet, it may be one of the highest chapels in Herefordshire. The former Chapel in 2013 is now a dwelling. The wall plaque states “Primitive Methodist Chapel 18??”. The date is inconclusive with, either 4 or 6 & 7 or 9. Thus was the plaque re-worked from another building, with the 47 being partially re-engraved over, the owner would like to know the answer?

There are corrugated iron buildings to the West, the Southern one with an arched window may be the building removed from Hergst Wesleyan Chapel near Kington (see below). The Chapel had a school room recorded in the 1940 survey, so this may well be it.

Herefordshire Through Time web site states :- Willey is a very small and isolated area in the north-north-west of the county, some 4 miles from Presteigne. The chapel is a small red brick building with yellow stone corner dressings and two arch-headed windows at each end. On 15th March 1869 the Circuit Quarterly meeting gave permission for the Willey Trustees to build a new chapel, and the present chapel was built in the summer of the same year. The population of the area at this time was 158. The land for the chapel was purchased from Mr. F.L. Bodenham of Hereford. At this time the chapel belonged to the Presteigne Circuit, along with three other churches. In 1870 the Society of Willey requested permission to establish a Sunday School, which was granted; the Sunday School went on to be successful. Willey had no permanent preachers but was instead under the ministry of travelling preachers from Knighton and Presteigne. Camp Meetings were held in fields nearby, and in the winter time a Christian Endeavour was held every Wednesday evening. In 1937 the Willey Society was given Hergest Chapel after it became disused. The chapel was dismantled and moved to Willey using volunteer labour, taking ten hours. This building was then used for chapel teas and coffee evenings. The chapel celebrated its centenary in 1969, and it was still in use in the 1980s. (Information taken from Fred Bluck, Methodism in the Marches)

Kelly’s Directory 1895 Hfds & Salop, P 180. WILLEY. The Primitive Methodists have a small chapel in the township.

Kelly’s Directory 1913 Hfds, P 206. WILLEY. The Primitive Methodists have a small chapel in the township.

On the 1889 OS Herefordshire 1:2,500 map the building is marked as Methodist Chapel (Primitive)

On the 1975 OS Herefordshire 1:2,500 map the building is marked Willey Methodist Church.