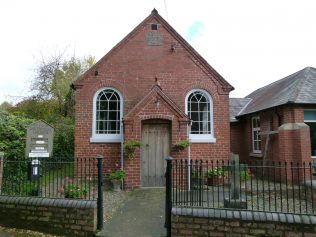 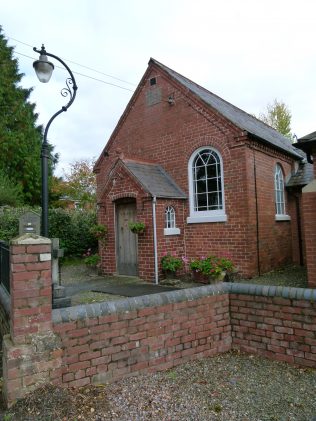 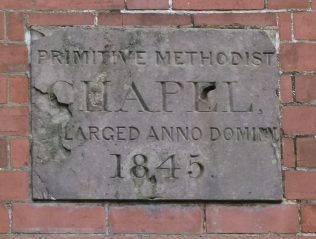 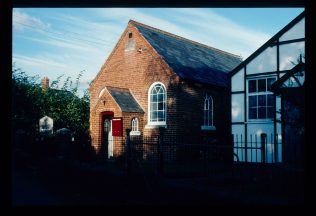 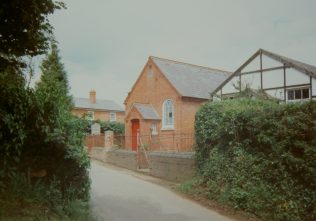 In 2013 the building is active as Wyson Methodist Church which is part of the Tenbury, Wyson & Orleton Methodist Cluster.

A hall stands alongside to the South, which was rebuilt in 1999.

There is a grave to the right of the entrance path, also a small loose headstone propped against the boundary wall.

Herefordshire Through Time web site states :- A chapel that was enlarged in 1845 but has two bays to the rear, which may be slightly earlier. The window heads and front gable were rebuilt.

The date stone above the door of this chapel reads “Primitive Methodist Chapel Enlarged Anno Domini (Year of our Lord) 1845”.

The chapel is of red brick with a slate-roofed porch at the front. Either side of the porch is a round-headed window and there are windows along each side of the building.

(Source: Royal Commission on the Historical Monuments of England, Chapels and Meeting-houses in Central England)

Kelly’s Directory 1913 Hfds, P 33. BRIMFIELD. The Primitive Methodists have a small chapel in Wyson, enlarged in 1845.

On the 1904 OS Shropshire 1:2,500 map the building is marked as Methodist Chapel (Primitive)

On the 1969 OS Herefordshire 1:2,500 map the building is marked WysonMethodistChurch.