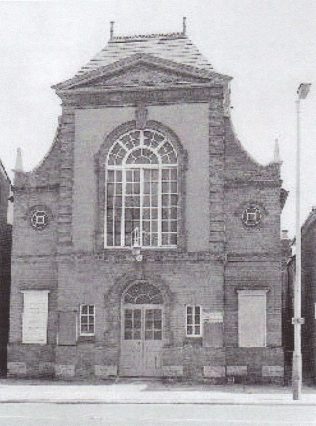 zoom
The original appearance of Berkhamsted PM Chapel
From "The last 100 years 1905-2005: A history of All Saints" 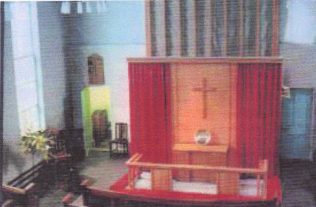 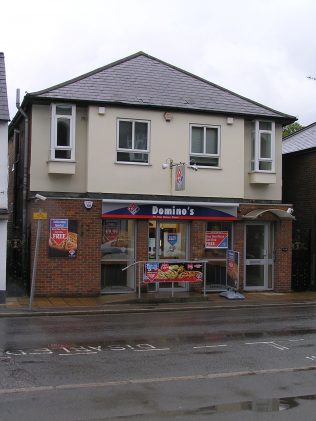 Few people today would realise that Domino’s Pizza, at 346 High Street in Berkhamsted, was once a Primitive Methodist chapel.

Primitive Methodism reached Berkhamsted from St Albans in the 1860s. The Herts Guardian, Agricultural Journal, and General Advertiser for Saturday 4 May 1867, in an article headed ‘New Primitive Methodist Chapel’, reported that:

“on Wednesday evening last a sermon was preached in the Wesleyan Chapel, by a lady named Miss Stedman, after which a collection was made on behalf of a new chapel, to be erected in Highstreet, opposite the Union Workhouse.”

Some more details about the new chapel appeared in the same newspaper’s edition published on 27 July 1867:

“The Primitives, ever earnest and zealous, have arranged for the building of a new chapel on the site opposite the Union Workhouse, recently purchased by them of Mr. Norris of Rickmansworth.”

The foundation stones of the new chapel were laid on Tuesday 30 July 1867. The following Saturday, 3 August 1867, the Herts Advertiser and St Albans Times carried a report of the day’s events:

“The third new place of worship within as many years was commenced on Tuesday, by the laying of the foundation stone of the new Primitive Methodist Chapel. A prayer meeting, held in the Town-Hall, was the commencement of the proceedings, after which the town was processioned by a large number of the members of the denomination in this locality, from Dunstable, St. Alban’s, and other places. … On arriving at the site of the building, which is opposite the Union Workhouse, the ceremony of the day was proceeded with, and four ladies laid the foundation stones, under the direction of Mr Osborn, builder, and Mr Linguard, mason. … The size of the building will be 40 ft. by 30 ft.”

The Hertford Mercury and Reformer also carried a report of the stone laying ceremony, providing the additional information that the prayer meeting which started the proceedings was held “between One and Two o’clock”.

It is interesting to note that the four foundation stones were all laid by women, something that appears to be a not uncharacteristic feature of Primitive Methodist chapels. Also of interest is that the newspaper report of the laying of the foundation stones mentions only the builder and the mason, and makes no reference at all to any architect or other person responsible for the design. Yet, the building had a rather unconventional appearance for a Primitive Methodist chapel, and was originally (for it has been, subsequently, very much altered) perhaps the closest approach to a Classical design to be found in Hertfordshire.

The Herts Advertiser and St Alban’s Times of Saturday 23 November 1867 reported on the:

“OPENING SERVICES OF THE NEW PRIMITIVE METHODIST CHAPEL. – On Tuesday, November 19TH, a sermon was preached in the above place of worship by the Rev. Thomas Pearse, (late of London). … The chapel is a very pretty building with an ornamented brick front.”

The Herts Guardian, Agricultural Journal, and General Advertiser for 30 November 1867 also reported that “the New Primitive Chapel, erected in High-street, opposite the Union Workhouse, was opened for Divine Service on Tuesday 19th inst”, adding that “on Sunday last Dedication-services were held in this tasty little place of worship”.

In 1871, only four years after the chapel’s opening, the minister responsible for the Berkhamsted society, Rev Thomas Russell, reported in the Primitive Methodist Magazine that the chapel “had to have a front gallery put in”. Berkhamsted was certainly larger than the average PM chapel in Hertfordshire; indeed, it was the fifth largest in the county, having 275 sittings after the installation of the gallery.

Both the Wesleyan and PM chapels in Berkhamsted continued in use after the 1932 Union, although the former Wesleyan chapel (an iron building opened in 1886) was closed in 1956 when the congregation amalgamated with the High Street society. In 1974 the Methodists decided to enter into a sharing arrangement with the Anglican parish church of All Saints, and both congregations joined together in the All Saints building at the corner of Cross Oak Road and Shrublands Road. The sale of the former Primitive Methodist chapel contributed approximately £47,000 towards the total cost of the project, which was about £100,000. The pulpit from the chapel was moved to All Saints, but unfortunately the Methodist pews did not fit!

The former PM chapel was converted to offices in the late 1970s. In 2004, the ground floor became a fast food outlet, and the first floor was converted to two flats in 2006. Plans of the building as it was in 2005 can be found on the web site of Dacorum Borough Council here . Among other things, they show that the interior of the roof of the chapel was preserved in the ceilings of the first floor flats.