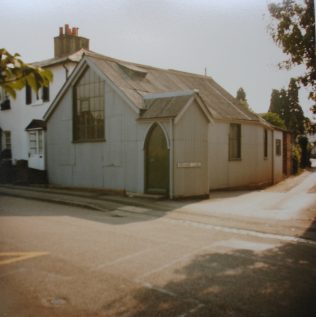 The picture shows the 1883 chapel in The Rutts which was replaced by the new 1891 building. At the time of Keith Guyler’s photograph it was the Guide Headquarters.

The laying of the memorial stones for the 1891 chapel is recorded in the Primitive Methodist magazine. The new chapel was needed because the society had outgrown its previous iron home. This chapel served until its last service on March n12th 1967.

Planning permission for its demolition and replacement by a two storey house was refused in 2008, but I am unable to find it on Google Street View in 2009 or later.  Is it still there?

There is good information about the growth of Methodism in Bushey Heath in JM Wood’s booklet and to see more about the chapels in Bushey itself click here.