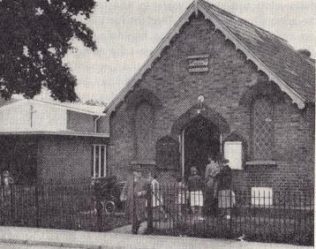 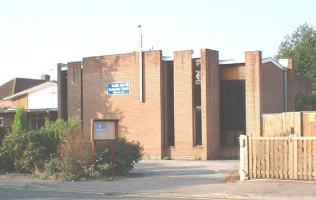 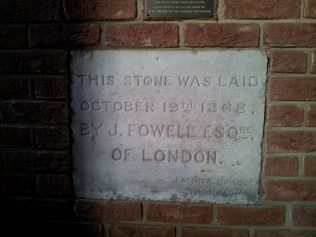 The settlement of Goffs Oak began as a cluster of cottages on the edge of Cheshunt Common, in the south-east corner of Hertfordshire. Wesleyan Methodists had had a presence in the area on the north side of Goffs Lane since 1833, but it was not until some thirty years later that the Primitive Methodists took an interest in this area of Hertfordshire. The 1860s were years in which the Primitive Methodist Connexion was vigorously expanding its evangelising efforts generally in rural areas, and Goffs Oak was then a village with a population of less than 600. However, it appears that there was a group of farming folk amongst the community who were strongly attracted to the ideals of nonconformity, and, moreover, wanted to do something about it.

The web site of the present Goffs Oak Methodist Church mentions that a small Primitive Methodist “preaching station” was established at this time, and it makes reference to “a John King arriving on the scene in 1851 from Rede in Suffolk, who was a fervent pioneer in the building of the Church”. Certainly, as the 1861 census shows, there was at that time a John King living at 2 Cuffley Hill Road with his wife Mary, and daughters Elisabeth, aged 12, Eliza, 7, and Roseana Jane, 1 month. John, an agricultural labourer, was said to be 37 years old and his wife 33. He was born in Chevington, Suffolk, although his wife was born in Rede in the same county. His two eldest daughters were also born in Chevington although the youngest had been born at Cheshunt. To judge from Roseana’s age and the place of her birth, it seems much more likely that the family arrived in Goffs Oak in 1861 rather than 1851. John and his family can be followed, in different locations and with a variety of occupations, in the census returns for the following fifty years. Interestingly, the 1911 census reveals that John and Mary had a total of seventeen children!

It seems that John King was one of the key people responsible for the establishment of a permanent preaching-place at Goffs Oak. A chapel was built in 1868 in Common Road (as the present-day Newgatestreet Road was known at that time), and was said to be big enough to seat 100 people. It was described as being of ‘unpretentious brick and slate’, and the interior was regarded as ‘severely functional’. The 1940 Methodist Church Statistical Survey describes the chapel as being built of brick, with seating for 80 people on forms – clearly severely functional. Nevertheless, despite these drawbacks, the chapel appears to have attracted large congregations.

The foundation stone, which survives in the present-day church, carries a short inscription:

“THIS STONE WAS LAID

Down in the bottom right hand corner of the stone are the words: “J. ARCHER, BUILDER. OLD FORD.” Sadly, unlike John King and his family, nothing seems to be known about either the stone-layer or the builder. Neither is it known how much the building cost; however, it is reported that the money was raised by the local congregation  ”through zealous endeavour by a small company of faithful and determined people”. John served as a trustee of the chapel for 53 years; he died, seemingly in the early months of 1921, at the ripe old age of 96.

It seems that the Goffs Oak chapel was part of the Enfield Station of the Primitive Methodist Connexion. There were three other chapels in the circuit at this time: Enfield Chase Side (which subsequently became a Salvation Army hall), Bush Hill Park, and New Southgate. Whilst the records from the time are sparse, the Baptism Register, started in 1869, shows entries covering Edmonton, Enfield, Southgate and Tottenham, as well as Cheshunt (GoffsOak). The first baptism in Goffs Oak was recorded in 1872.

The1868 chapel survived unaltered until Union in 1932 and for many years afterwards. However, the rapid expansion of housing in the area in the 1950s generated a need for more space. In 1957, a dual-purpose hall was built on land adjoining the original chapel. This was used primarily for worship whilst the 1868 building was utilised mainly for youth work. At some point, it became necessary to demolish the old chapel; it was replaced by two prefabricated structures but these buildings, in their turn, were also demolished. They were replaced by a new church, consecrated in 1977, and built on the site of the original 1868 chapel. When excavations commenced for the construction of the new church, the original foundations of the 1868 chapel were found. The original foundation stone had been preserved when the chapel was demolished, and it was re-laid at the front of the new church, sitting over the original foundations, where it continues to serve as a reminder of the achievements of John King and his fellow Primitive Methodists over a hundred and forty years ago.