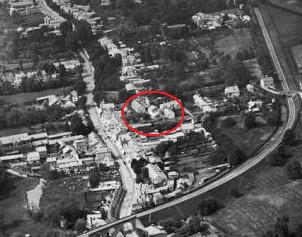 zoom
Aerial photograph taken in May 1920
Britain from Above 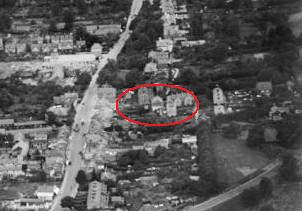 zoom
Aerial photograph taken in 1928
Britain from Above

It seems that Primitive Methodism reached Hemel Hempstead from St Albans at the start of the second half of the nineteenth century. There is no mention of the presence of the denomination in the town in either in William Upton’s 1847/1848 survey or the 1851 Ecclesiastical Census, although the Post Office Directory of Essex, Herts, Kent, Middlesex, Surrey and Sussex for 1855, referring to Hemel Hempstead, says that “here are Dissenting meeting-houses for … Primitive Methodists [and other nonconformists]”. This early meeting-place was clearly not a chapel, because the first such Primitive Methodist building in Hemel Hempstead was not constructed until 1861. The first chapel was built in Albion Hill, just off the eastern side of Lower Marlowes. The stone laying ceremony took place on Wednesday, 26 June 1861 and a report of the event appeared in the Hertford Mercury and Reformer for Saturday 6 July 1861.

“PRIMITIVE METHODIST NEW CHAPEL AT MARLOWES. – The ceremony of laying the foundation stone of a Primitive Methodist Chapel at Lower Marlowes took place on Wednesday, the 26th inst. The site selected for this new place or worship is opposite to the Elms Iron Foundry; the front of the Chapel will face the road leading to Paradise. The Rev. G. Lamb, of London, laid the stone. The stone having been laid, Mr Lamb addressed the spectators. After a few preliminary observations, he said he trusted that God would pour down his blessing upon those who were engaged in the undertaking. “I,” said the reverend gentleman, “lay this stone in the name of the Father, Son and Holy Ghost, and may God in his infinite mercy grant that this place may be the birth-place of many souls.” The building would not be distinguished by any beautiful architecture. Not that they objected to beautiful houses of God; but their circumstances were such that all they were able to do was to erect a plain structure for the worship of God. … Mr Lamb then gave an account of the origin of the Primitive Methodist Society, which took place 51 years ago. He also gave the following statistics of the present state of the society: … Chapels, 2,110; rented rooms, 3,343; … .”

The chapel was opened on Sunday 8 September 1861, and a report of the event duly appeared in the Hertford Mercury and Reformer for Saturday 21 September 1861.

“OPENING OF THE NEW PRIMITIVE METHODIST CHAPEL AT MARLOWES. The newly erected Primitive Methodist Chapel at Lower Marlowes was opened on Sunday se’nnight, when three sermons w ere preached to crowded congregations —in the morning and evening by the Rev. S. Turner, of Aylesbury, and in the afternoon by the pastor of the Baptist Church, Hemel Hempstead. … [The Chairman, Jesse Hobson said he] could remember the Chapel of Ease at Boxmoor being built, and he could remember when a few persons who previously attended the chapel of which the Rev. W Emery was now the pastor, opened a room at Two Waters and one Mr Rippon used to preach there; and he could also remember the chapel on Boxmoor, in which Mr Leonard preached, being built. They now had a new Primitive Methodist Chapel (which he believed would soon be found not half large enough,) and also a large and beautiful temple in which their friend Mr Emery officiated, and which he hoped would not be half large enough. … Many new chapels in connexion with the society had been built, the situations of which were vastly superior to those of the old chapels. Such was the case with their new chapel at Marlowes. … The cost of the new chapel is 260l., towards which as yet only 50I. has been subscribed.”

An article in the Primitive Methodist Magazine for 1861 also reported on the opening ceremony and gave a description of the chapel:

“We have recently opened a neat and substantial chapel at Marlowe’s, Hemel Hempstead. We have long needed a more commodious place for worship in this neighbourhood. In the spring of this year we purchased a building site in an excellent situation. No time was lost in the erection of the chapel, which was opened on Sunday, September 8th, 1861, …. . The chapel is thirty-three feet by twenty-seven outside, sixteen feet from the floor to the wall plate, the building is of brick and covered with slate, it has six windows, boarded floor, a lobby, it is well ventilated, and fitted up with seats. The entire cost will be £270.”

There are subsequent references to the chapel in the Post Office Directory for Hertfordshire in 1870 and 1874, in the latter of which it shares an entry with the Crouchfield chapel at Boxmoor which had been opened in 1869. According to the History of Hemel Hempstead, “an official rate notice for 1868 shows that it was published on the doors” of the Primitive Methodist chapel at Albion Terrace. The chapel is also clearly shown in Albion Hill on an Ordnance Survey 1:500 scale plan dated 1877, where it is said to have “space for 120”.

Whilst the Boxmoor chapel went from strength to strength, the Hemel Hempstead society seems to have quite quickly faded out of existence. By 1883 the building had become occupied by the Salvation Army and, as a result, was known as the “Old Glory Shop”. Kelly’s Directory of Hertfordshire for 1886 confirms that the Salvation Army were present then in Albion Hill.

The Salvation Army continued to occupy the building until it moved in 1908 to larger premises on the west side of Marlowes. After the Army’s departure, the building was converted to form Hemel Hempstead’s first cinema, opening as the Electric Theatre in 1909 with 180 seats. A new stage in a yard at the back was added in 1912 and, although it was still open in 1913, it seems that by 1916 it was no longer licensed. Subsequently, the building was further enlarged to accommodate 300 people and it re-opened as the Aero in 1920. The Aero closed on 17 July 1925, a larger replacement building opening in Marlowes three days later.

Following the Aero’s move to Marlowes, it seems that at some point thereafter the building was used as a printing works. The building can be seen on aerial photographs taken in 1920 and 1928; it is clearly shown on an Ordnance Survey 1:2500 scale map dated 1940-47, and appears still to be present on an Ordnance Survey 1:10,560 scale map of 1964. However, by 1968 it had evidently been demolished. The Marlowes Shopping Centre now covers its former site (which falls somewhere in the vicinity of the unit now occupied by River Island).