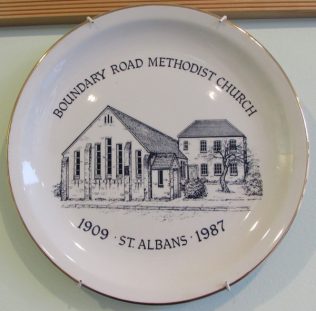 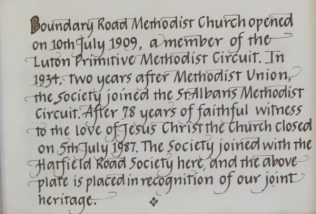 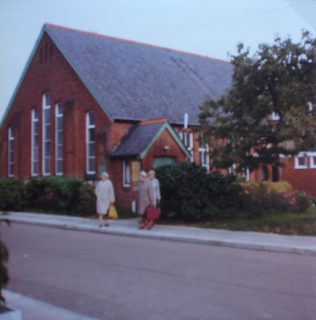 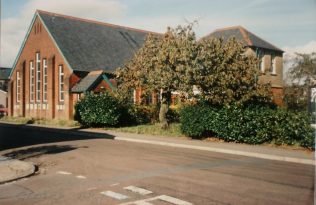 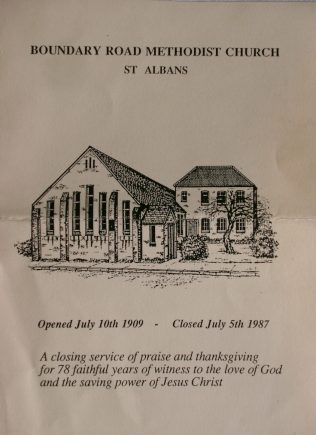 Unfortunately the photograph in the pdf of the article is unusable but I have a picture of the church from a commemorative plate we produced to mark the witness that the church had been over the years. This hangs in the church vestibule alongside the plate which was produced for the centenary of Hatfield Road.

The Boundary Road War Memorial is also located alongside our own. Details are on the My Methodist History website Here

I am trying to see if the family of one of the member of Boundary Road has any photographs of the building and if they do have any suitable ones I will add them to this page.

ON March 27th memorial stones of the new school-hall and vestry were laid. Though we only re-entered St. Albans two years ago our society has already made splendid progress, and the demand for a new building was urgent. The new hall will be well lighted, and provide seating accommodation for 300 people. The price is £767 10s.

When the opening hymn was announced a large crowd had assembled. The Rev. A. J. Wigley led in prayer, the Rev. C. M. Hardy, B.A. (Baptist), reading the Scriptures The address given by Rev. T. Mitchell set forth our position as a Church, and the great truths for which we stood. The Mayoress of St. Albans laid the first stone, Mrs. Ryder, wife of Councillor Ryder, the generous donor of the site, laying the second. Eleven others were laid by ladies and gentlemen taking sympathetic interest in our work. A public tea was provided in the Baptist school room, kindly lent by Rev. H. W. Taylor and his deacons, who from the first have shown the kindliest sympathy with our work.

The great public meeting in the Tabernacle was under the presidency of the Mayor of St. Albans (Councillor A. Faulkner), the vice-chair being occupied by Councillor Ryder. In the course of his remarks, the Mayor said: He had been told that many years ago Primitive Methodism had a flourishing cause in St. Albans. He could not understand how it was that having once had a cause they abandoned it. It was not in the order of things for Primitive Methodists to go back. Now they had returned he trusted it was with a determination to stay. Councillor Ryder said the position the Mayor had occupied in that day’s proceedings would be one of the most important of his year of office, because he had given a send-off to an effort by a religious body which had a great and honourable history.

The Rev. T. J. Gladwin followed, with a store of interesting information about our early work in St. Albans. The Rev. J. G. Greaves (Wesleyan) wished the cause God speed. The Rev. T. Mitchell followed with a most interesting address, showing how by means of our Church Extension and Chapel Aid Funds our work as a Church had been immensely forwarded. Towards the cost of the present building the Extension Fund had loaned £400 free of interest.

SATURDAY, July 10th, saw the opening of the new school hall. The story of the mission is full of interest. Two years ago a local preacher who had come to reside in St. Albans set out to find our church. To his surprise he found that we had no place of worship in the city; but he succeeded in finding two or three Primitive Methodist families. After considerable difficulty a room was secured, a class formed, and weekly services were held.

The Luton Second circuit ultimately took charge of the new society, the G.M C giving a grant towards the salary of a special agent. The society making rapid advance the question of building a school chapel was discussed.

At this stage Councillor B. Ryder, J.P., offered a splendid corner site in a rapidly developing area not served by any Free Church. On March 27th memorial stones were laid and the opening day found all complete. At 3 o’clock a short service was held; after a hymn prayer was offered by the

Mrs. Ryder having unlocked the door the hall was soon filled to its utmost capacity. The opening sermon was preached by ProfessorPeaks, M.A., D.D. The sermon was a masterly one and will not readily be forgotten.

After tea the hall was again filled for the public meeting. Councillor S. Ryder J. P. presided. Edwin Lee, Esq., J.P., taking the vice-chair, the principle speakers being Mr. G. H. Summerbee, Revs. H. W. Taylor and J. T. Horne. Again and again we were assured that in this new venture all the Free Churches of the city wished us Godspeed.

On Sunday, July 11th, the opening services’ were continued, the Rev. A. H. Kynaston preaching to a good company in the afternoon, and Dr. Peake charmed a crowded audience in the evening with a splendid discourse. The new premises include school hall to seat 300, class room, etc. The land, value £200, has been given. The total coat of building will be about £800. Total raised to date £323 16s. The Misses Ryder and Mr. and Mrs. Davies have furnished the class room and provided a handsome clock and beautifully bound Bible and hymnal. Preachers for further opening services Revs. W. Welford, A.E. Edwards and F. S. Clulow.