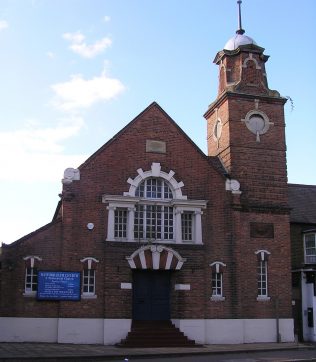 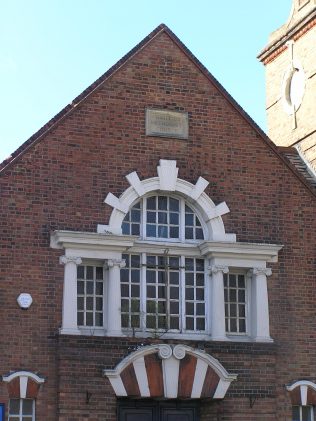 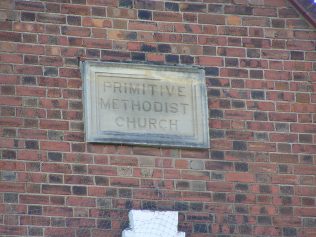 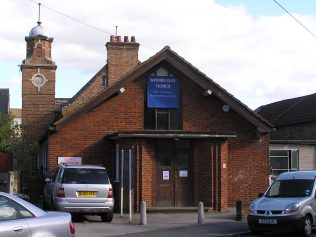 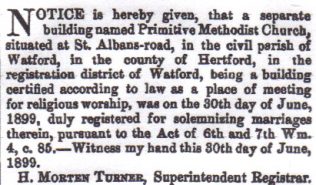 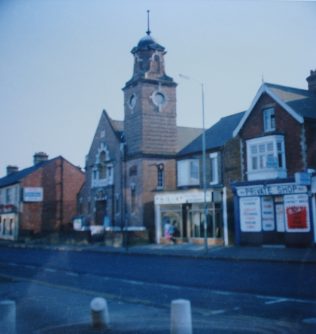 A Primitive Methodist society was formed in Watford in 1840, and, from 1865, its members worshipped in a chapel in Carey Place. Clearly, the cause was doing very well because, even though the congregation at Carey Place had moved to a larger and purpose-built chapel in Queens Road in 1886, a site for a new chapel was also being sought in a rapidly expanding part of the town to the north of the town centre. A site in St Albans Road, opposite the Lion Brewery and extending back to Leavesden Road at the rear, was eventually purchased in 1890. In 1891, an iron chapel was erected on the rear part of the site fronting Leavesden Road. This was one of two such iron structures known in Hertfordshire, the other being at The Rutts, Bushey Heath (built in 1883).

It is rare to find a description of such temporary chapels; fortunately, in October and November 1891, the editor of the newly-founded Watford Times was making a number of visits to local churches and chapels and writing about his experiences, and one of his visits was to the recently constructed iron hut in St Albans Road. Here is his report:

“ … here in Watford there is evidence that the needs of a growing population is being met by extended efforts. On the Callow Land Estate, where many cottages have just been completed, the Primitive Methodists have erected a temporary chapel, and there regular services are held for the spiritual benefit of the new residents. … The chapel is a small corrugated iron edifice, with its roof painted a dark chocolate; and it is “dropped down”, as it were, in the midst of the building operations. On leaving the road, one sees in heaps the gravel which has been thrown up from pits where the foundations of new houses are to be laid. A road is evidently in course of construction, for large granite kerb-stones lie about in glorious disorder. Rows of cottages are already erected, and preparations are being made for more. As I approached the chapel the lamp outside was being lighted by the homely means of striking a match and standing on a chair. Inside there was a great congregation. There were yet some minutes before the commencement of the service, and during that interval, and as it progressed, the little chapel became full almost to over-flowing. It was a comfortable little building, – although it became rather stuffy, – and is lined throughout, roof and walls, with stained boards. … The stranger who goes among the Primitive Methodists of Watford is evidently sure of a warm welcome.”

The construction of iron huts was one particular response to the two related issues of the need for more chapel accommodation and the lack of sufficient funds for building projects. Regarded initially as a temporary measure prior to the building of a more permanent replacement, it would seem that in a number of cases throughout the Connexion the more permanent chapel never materialised. The Primitive Methodist Magazine came out strongly against such temporary structures in reporting on a discussion at a meeting of the Missionary Quarterly Committee:

“As far as could be gathered, the Committee as a whole were absolutely unanimous on the subject. It was contended that we ought to cease erecting these iron buildings. The chief reasons adduced were that they do not last, and in this respect are the opposite of economical; that in a storm of wind or rain they are so noisy that it is sometimes impossible to hear either the preacher or the singing, and are therefore destructive of the spirit of worship; and last, but not least important, they are not the kind of structure in which we succeed best in building up a permanent cause. These views, expressed by men of large experience, should prevent circuit authorities from having anything to do in the future with this class of erection.”

The societies at Bushey and Watford were among the most successful for the Primitive Methodists in Hertfordshire and were, as a result, more likely to be able to finance the building of permanent chapels. This probably chiefly explains why both iron churches in Hertfordshire were in existence for only a short period of time.

In Watford, the foundation stones of a permanent chapel, on the undeveloped part of the site fronting St Albans Road, were laid in June 1897, although none is visible today. The chapel, which was formally opened in May 1898, was designed by the father and son partnership of Thomas and Charles Barker Howdill (ARIBA), who were architects from Yorkshire specialising in Primitive Methodist buildings. Thomas Howdill designed Ramsay PM chapel on the Isle of Man; Charles Howdill is known to have won a number of national awards for his design work and this building is listed in his biography as one of his principal architectural works.

The architects designed the chapel in the Baroque Revival style, which is quite unusual for Primitive Methodists; certainly, there is no other example of this style in Hertfordshire. It is constructed of Fletton red bricks in Flemish bond with Bath stone dressings, and it has a pitched roof of Welsh purple slate.A square bell tower is attached to the right hand side of the front elevation of the church.The building cost £1,650 and the builders were Messrs Cannon & Fisher of Northwood, Middlesex.

It was a large chapel, by Hertfordshire standards; according to Kelly’s Directory of Hertfordshire for 1898 and the 1940 Methodist Church statistical returns, the building had seating for 450 people, with a suite of five rooms in addition to the chapel. Indeed, this chapel was one of the three largest Primitive Methodist chapels in Hertfordshire, all of which were built in growing centres of population in the last in the last forty years of the denomination’s existence. The other two were Whippendell Road, Watford (built in 1903) and Letchworth (built in 1914). The chapel in Letchworth was built in the centre of the newly-expanding garden city; in Watford, however, the new chapels in St Albans Road and Whippendell Road were located not in the town centre but in areas of rapidly expanding residential development to the north and west.

Just a year after its opening, on 30 June 1899, the chapel was registered for the solemnization of marriages. The old iron chapel building was subsequently replaced by a Sunday school, although a new church hall was erected on this part of the site in 1960. In 1971 the congregation amalgamated with the former Wesleyan church at Harebreaks, Watford and the old Primitive Methodist chapel was closed. The building was subsequently sold to the Elim Trust Corporation and it remains in use today as a place of worship for this organisation.

Petty, John, The History of the Primitive Methodist Connexion, from its Origin to the Conference of 1860, the First Jubilee Year of the Connexion, revised and enlarged by James Macpherson (London: J. Dickinson, 1880), pp.452-3